Hanson over Mickelson at Masters

Peter Hanson of Sweden kept pouring in birdies – including on the tough closing holes on 17 and 18 – to finish with a stellar 7-under-par 65 to grab the third round lead at The Masters.

Hanson is at 9-under, a stroke ahead of Phil Mickelson with the world number fourteen firing a third round 66 to build upon opening rounds of 74-68. 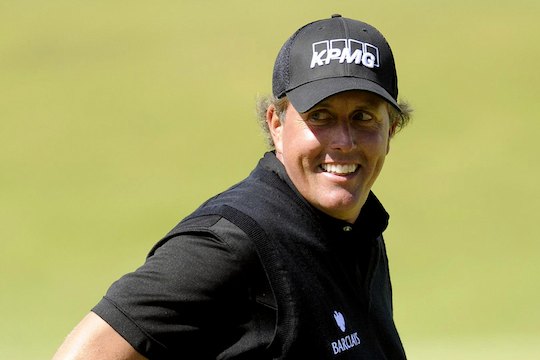 Louis Oosthuizen follows at 7-under and in third position, a stroke ahead of Bubba Watson.

Geoff Ogilvy is the best of the Australians in a tie for 27th position at plus-1, with Adam Scott a stroke behind at plus-2 in a tie for 32nd position.

Arron Baddeley dropped twenty-seven places with a disastrous third round of 5-over-par 77 to be in a tie for 38th position.

Hanson, despite playing in only his second Masters, seemed unfazed by the pressure, particularly when curling in a long birdie putt on 17.

“I just played great, it was a great experience,” said Hanson.

“I think it will be hard. It’s only my second Masters. I’m going to go spend a little time with my family and get as much sleep as I can to be ready for tomorrow.”

Hanson, 34, has played in only four majors, his best finish coming in a tie for seventh at last year’s United States Open. He has won four European Tour tournaments in his career.

Mickelson, in contrast, is trying to win his fourth Masters and remains the fans’ favourite.

The galleries howled as he made his back-nine charge, with Mickelson grinning the whole way in his trade mark smile of appreciation.

A win would make him one of just four men – alongside Nicklaus, Arnold Palmer, and Tiger Woods – to hold four or more green jackets, while a fifth major title would elevate him to the company of Seve Ballesteros and Byron Nelson.

Second-round co-leaders, Fred Couples and Jason Dufner, quickly found themselves in trouble, as did Rory McIlroy, who started a shot back but started collecting double bogeys on the front nine.

Couples and Dunfer fired 3-over-par, 75′s to move back into a tie for eleventh. McIIroy fired a third round of 77 to slip twenty-four places to be in a tie for twenty-seventh at plus-1.