Peter Hanson’s brilliant second round 64 to be at 14-under-par gave the Swede a two shot lead over World Number 1, Rory McIlroy, at the halfway stage of the BMW Masters in Shanghai.

McIlroy did not drop a shot in a round of 7-under-par 65 to move into second place on 12 under par. 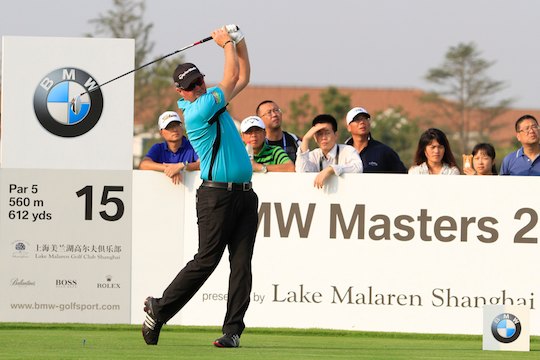 Peter Hanson on the 15th on Day 2 of the BMW Masters 2012 at Lake Malaren Golf Club, Shanghai, China. (Credit: www.golffile.ie)

The pair have opened up a gap with the rest of the field with Hanson’s compatriot Robert Karlsson, three strokes further back in 3rd position after he also shot 64 to move up the leader board.

Hanson, the world No. 25, captured a fifth European Tour victory a fortnight before the Ryder Cup by winning the KLM Open at Hilversum.

“I’ve been fighting really hard with my game after the Ryder Cup to get back the motivation because it is hard after such a big week and you prepare for so long to try and qualify,” said Hanson.

“I’ve got four events left this year, three on the European Tour and the Nedbank Challenge, so I’ve set some high goals and I want to finish the year as strongly as possible.”

McIlroy had complained of headaches during his opening 67 on Thursday, which the Northern Irishman put down to pollution. Yesterday he had to battle the sound of fireworks, music and pile-drivers around the course, yet managed to keep his composure.

“Fireworks? I thought they were gunshots going off there,” said McIlroy in a joking manner following his second round.

“You’re always going to have distractions out there, whether it is people with cameras or movement in the crowd. Once you’re over your shot, you’re sort of in your own little bubble and your zone and you don’t really notice those sort of things.”

Despite the added distractions the World No. 1 was pleased with his game and how he has set himself up for the weekend assault on the $7million tournament.

“The more you put yourself in this position, the more comfortable you become with it,” McIlroy said.

“I like the fact that most weeks I tee it up, I can get myself in contention.”

McIlroy is looking to tighten his grip on the Race To Dubai as he seeks to emulate Luke Donald’s feat of last year by winning the money lists on both sides of the Atlantic.

A win at the BMW Masters would certainly elevate his standing in the rankings and towards achieving this goal.

Richard Green is the best of the Australians in a tie for 31st position at 3-under.