Crail, Scotland: Chinese 20-year old Haotong Li delighted the home fans posting a sizzling final round 64 to drive off with victory in the Volvo China Open at the Topwin Golf and Country Club in Beijing.

Li began the day two shots behind Felipe Aguilar and Lucas Bjerregaard but with a large home gallery cheering on his every shot, he reeled in the Chilean and held a share of the lead as he stood on the 17th tee. 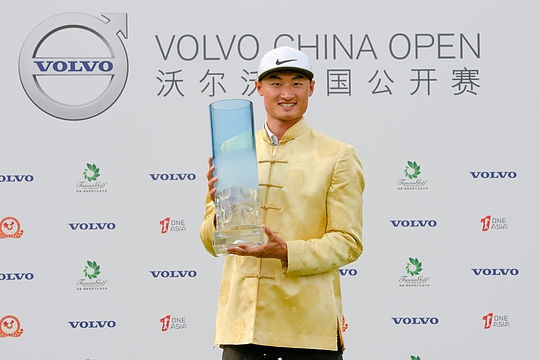 Li birdied the penultimate hole to get 22 under and when Aguilar – playing in the group behind – put his tee-shot on the 16th into the water, a par up the last was enough to give Li a three-shot victory and a first European Tour title.

The win makes China the first country to have players win the event in successive years after Wu Ashun’s triumph last campaign and also gives the world’s most populous nation a record fourth victory, one more than Australia and England.

For Li, it is a breakthrough win for a player who lost out in a play-off at the Shenzhen International last year and followed that with a sixth-placed finish in the 2015 edition of this event.

He missed the cut at Genzon Golf Club last week and was delighted to kick-start a season that had so far been disappointing on both sides of the Atlantic.

Li appeared not to realise he had the lead until he was on the 18th fairway and he admitted he was grateful to his caddy for reining in the aggressive approach that had served him so well all week.

“When I had my tee-shot, I walked to my second shot there and I was thinking I need to go hybrid to get to the front edge to give me an easy chip to there but my caddy said, ‘Haotong, you’re already three shots in the lead, you’ve just got to lay up and make par to win’. So thanks to him!”

Aguilar held a two-shot lead at the turn with excellent approach play producing birdies on the first, third, fifth and seventh while Li also turned in 32, with big drives making light work of the seventh and eighth and adding to gains on the third and fifth.

The advantage was wiped out as Li holed from the fringe on the tenth and produced a lovely chip on the 11th but Aguilar responded with a nerveless ten-foot putt on the same hole.

Li put his tee-shot on the 15th on the cart path but got close from his free drop to get back into a share and an approach to three feet on the 17th – coupled with Aguilar’s double-bogey on the 16th – meant a safe play up the par five last sealed the win.

Aguilar parred the 17th and 18th to sign for a 69 and finish second, a shot clear of Bjerregaard, Richard Bland and Marcel Siem.

Nathan Holman closed the tournament at T28 and 11-under with Brett Rumford another shot back at T34. Jason Scrivener (T44), Nick Cullen (T48) and David McKenzie (66) were the only Australians to make the cut.