South African Justin Harding fired a final round 5-under-par 66 to win the European Tour’s Kenya Open by two shots at 21-under-par over American Kurt Kitayama at the Karen Country Club in Nairobi.

It was the 35-year-old’s second European Tour title, after winning the 2019 Qatar Masters. 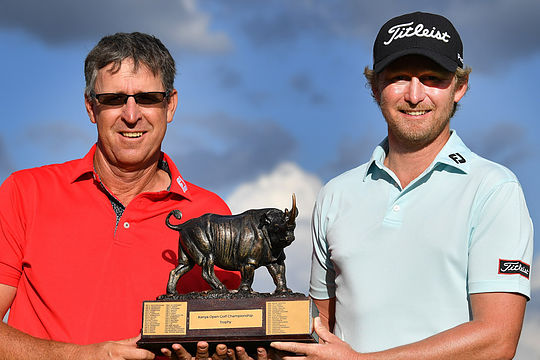 “It was hard work. I was happy with the way I played,” said Harding.

“I’m glad I shot one better than a couple of years ago, I was bummed about that, but I’m just happy with the way I managed my game. I made a mess of 11 and 12 and ultimately the way I played 13 through 18 this week, it was a bit of a stressful time.”

In 2018 Harding had a solid run of results that saw him win two Sunshine Tour and two Asian Tour titles and at the 2019 Masters he finished a respectable 12th place in his first appearance.

Coming into this week’s tournament he had struggled with some form having not recorded a top-10 since September 2020.

Harding’s win moved him up 74 places to be 121st in the world rankings.

“Ultimately I just hope that I can kick on and, I mean, it would be nice if I could go on a run like I did in 2018/19, but who knows, maybe I don’t. We’ve just got to keep giving ourselves some chances.”

Scott Hend was the best of the Australians finishing in a tie for 16th position at 12-under-par, with Maverick Antcliff missing the weekend.

This week, the European Tour remains at Karen Country Club for the Kenya Savannah Classic.