South African Justin Harding claimed his maiden European Tour title with a six-under-par 66 in the final round of the Qatar Masters to win by two strokes at the Doha Golf Club on Sunday.

Harding’s final round included three birdies in the first four holes before embarking on a birdie blitz on three of the final four holes to finish 13-under par, ahead of nine other golfers who finished 11 under. 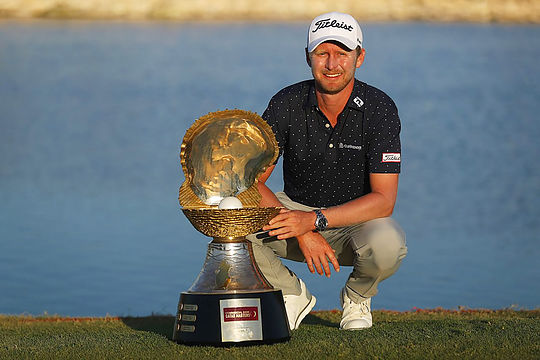 England’s Oliver Wilson, who had a one-shot lead after the third round on Saturday, also finished tied for second place, two strokes behind.

Harding has struggled in recent times to close out a tournament despite being in contention regularly and Sunday’s win, his first from 54 starts on the European Tour, had delivered the certainty he was after to enable a full schedule to be planned moving forward.

Harding was playing on a reduced European Tour schedule this year as a category 18 player, with category 17 and lower players having full status. Victory earns him a full card.

“It was nerve wracking, especially coming off a situation I haven’t really been in before. I didn’t enjoy it but I’m glad it happened and now we move on. I get into the events that I’d like to be playing in again.”

“Schedules change, and I will no longer have to wait for last-minute spots to open up. I’m looking forward to seeing what happens going forward and playing in some bigger events.”

With the win Harding will move to World No.51, just one place outside automatic qualification for the Masters. Harding has been a multiple winner on the Sunshine and Asian Tours, having won seven and two times on those tours respectively in what is reflective as to his travel commitments to play the game, having since February last year competed in 22 countries and in the process securing 15 top-10 finishes.

He becomes the fifth South African winner of this event after Darren Fichardt, Ernie Els, Retief Goosen and Branden Grace.

The three Aussies were all well in contention heading into the final round, however, a 72 from Cullen, the 2014 Australian Masters champion, and 73 each from youngsters Lee and McLeod saw their chances of victory evaporate.

Lucas Herbert faded with closing rounds of 70-74 to finish in a share of 48th position. Deyen Lawson finished at 1-under for a share of 55th position.

Sam Brazel missed the weekend, as well as Scott Hend.