American Brandon Harkins has taken out his maiden Korn Ferry victory winning the 2022 Bahamas Great Abaco Classic at The Abaco Club in the Bahamas after a two-hole playoff with China’s Zecheng Dou.

Dou, who held the 54-hole lead, shot a 3-under 69 but opened the door for a playoff with bogeys on the 16th and 18th. Harkins, 35, in comparison was behind by two strokes with three holes remaining in regulation, but finished with three consecutive pars to make the playoff. 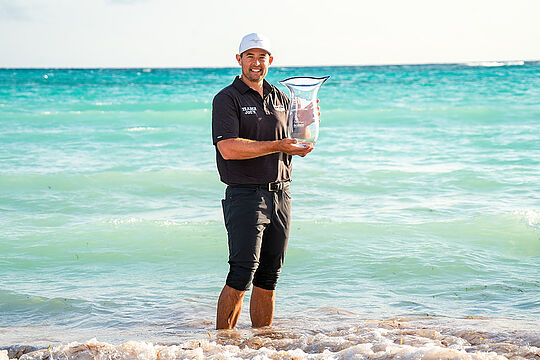 The pair played the par-5 18th twice, each making par on the first hole. Harkins eliminated Dou with a par on the second to claim his first win in twelve years and 134 starts on the Korn Ferry Tour as a professional.

“It’s unbelievable,” said Harkins. “I’m starting to get a little bit emotional. This is for my wife and my two boys at home.”

“This win, it feels great, but you know what, it’s for them, it’s for my family, my mom, my brother, everyone. There’s been weeks where I felt like I’ve played pretty darn good and haven’t won.”

“Playing the PGA Tour is great, it’s what we all strive to do, but with that said, everyone wants to win, and this is my first big win out here. This means a lot to me. I will never forget this.”

The victory moved Harkins to the top of the Korn Ferry Tour Regular Season Points Standings, 21 points ahead of last week’s winner, Akshay Bhatia, who missed the cut this time around.

The second Korn Ferry tour event start for the season was not good for the Australians with none making the weekend.

Rhein Gibson missed the cut by two at 1-over-par, with Curtis Luck at 6-over.