Irishman Padraig Harrington ended a four-year title drought with dramatic victory at the US$750,000 BANK BRI Indonesia Open on Sunday.

The three-time Major champion held a four-shot lead at the start of the final round but stumbled to the turn in 37 as Thanyakon Khrongpha of Thailand birdied three of his opening five holes to lead by two shots after nine holes. 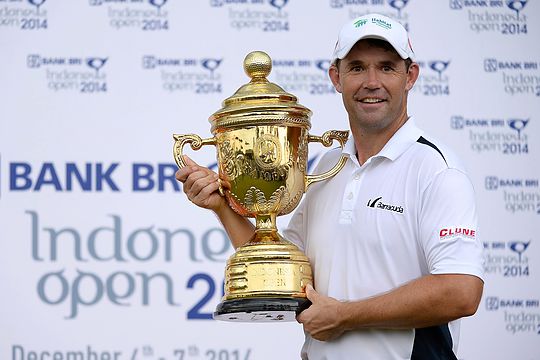 Harrington fought back after a two-hour rain delay to tie with Thanyakon heading into the 18th hole, where both players found trouble with their approach shots.

The 24-year-old Thai hit his second shot into the water for a double bogey, prompting Harrington to take the wise option of a penalty drop from the hazard edge, before sinking a 15-foot par putt to secure a two-stroke victory with a total of 16-under-par 268.

“Winning is a good habit to have. It gives you a lot of confidence and I need that confidence.” Harrington said.

“I didn’t start too well but I came through and I got the win. This win brings a lot of confidence to my game and hopefully it will show up next year.”

“I had a bad break on the 18th hole when I hit my tee shot and it rolled to the edge of the hazard.”

“I was about to chip my ball sideways to the fairway but when Thanyakon hit it into the water, there was no point to take a chance. So I went back to the fairway and hit my six iron for my best shot of the week.”

A dejected Thanyakon rued the missed opportunity to win his first Asian Tour title after struggling with nerves on the 18th hole.

“It was a great final round (69) from me but I was under so much pressure on the last hole. I’m still happy with how I played. The rain delay stopped my momentum. It wasn’t good. The pressure made me scared,” said the Thai.

Fellow Australians Jake Higginbottom, Terry Pilkadaris, Sam Brazel and Scott Hend also finished inside the top-ten in a tie for 7th at eight-under.