Harrington denied defending champion, Andy Sullivan by a shot posting a final round 65 for a 23-under par tally on the Oceanico Victoria course. 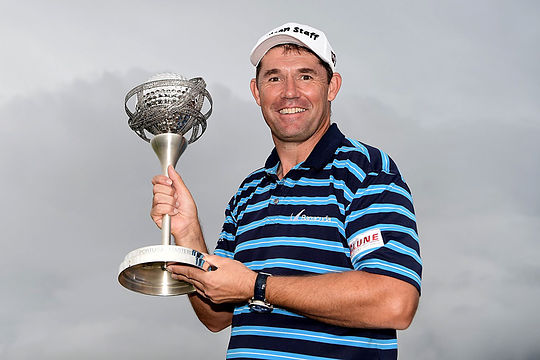 While Sullivan missed out on becoming the first repeat winner, Harrington’s triumph was all the more special given it was the first tournament hosted on an Arnold Palmer designed course since Harrington’s fellow Open Championship winner passed away late last month.

But it was not all plain sailing for Harrington who handed a huge following of Irish supporter’s heartache when he sprayed his second shot down the last into a green side grandstand.

In fact, Harrington’s ball left a clear mark after cannoning off an advertising board fronting the stand before landing in rough from where he chipped to three-foot par past the flag and ultimately holed the winning putt.

It is Harrington’s 30th win worldwide but his first win on European soil since capturing the 2008 Open Championship at Royal Birkdale and also his first regular European Tour triumph since landing the 2007 Irish Open at Adare Manor.

“I feel really good as I was very relaxed all week, and I was in a nice place mentally,” he said. “I’ve been winning elsewhere over the last number of years.”

“I won last year in the States and I’ve won a few events in Asia so I’ve been winning enough to keep me going but it is nice to win in Europe and it’s always important to win in each decade.”

The win earned Harrington a €333,330 first prize cheque and lifted him from 96th to 43rd on the Race to Dubai, and the assurance of contesting the start of the up-coming Final Series.

Harrington also revealed he put his victory down to reading ‘Pressure Principle’, a book released earlier this year by Dave Alred, who has worked with England premiership sides Manchester City, Sunderland and Watford along with the England Rugby team, the British Lions plus golfers such as Luke Donald and Harrington.

“I’ve been reading Dave Alred’s Pressure Principle and it gave me a few pointers that maybe I’d been missing out on and I stuck to those all week,” he said. “It was a big plus for me.”

The 45-year-old went into the final round trailing by two shots but it wasn’t until he grabbed a fifth birdie at the 14th that he moved one clear at 22-under par.

Sullivan then joined Harrington on the same score when the recent Ryder Cup star, and playing in the penultimate group ahead, birdied the 17th.

Harrington then matched Sullivan’s 17th hole birdie to again go clear by one at 23-under par.

But there was some cause for concern when Harrington stood over his second shot down the last knowing he’d picked up some mud on his ball.

But Harrington clearly got a flyer and looked on in amazement as he ball cannoned off a grandstand and burying itself in rough.

Though the sight a few minutes later of Harrington about to punch the air with his right arm as his ball was about six inches from the hole knew he’d found the bottom of the cup for a winning par.

His huge band of Emerald Isle followers could not have been happier while Flood wasted little time souveniring yet another 18th hole flag to add to his collection.

“I hadn’t won this year, and I know the year is nearly done, so it’s always important to get a win every year, a winning year,” he said.

“It’s a big win as the Portugal Masters is a big tournament. I’ve been coming here for six years and I’ve always liked coming down to Portugal.

“And with the Irish crowds, there’s so many Irish people here, it has always felt like a home away from home, so it’s really nice to win the tournament.”

Jason Scrivener finished in a tie for 17th to top the small Aussie field this week in Portugal with WA’s Brett Rumford another shot back at 15-under and equal 22nd place.