Crestfallen captain Padraig Harrington reckons his European Team team were beaten at their own-game by a copy-cat Stars and Stripes winning side.

Harrington has returned to regular competition fighting wind and rain in shooting a three-over 75 at Carnoustie Links on day one of the 20th anniversary Alfred Dunhill Links Championship. 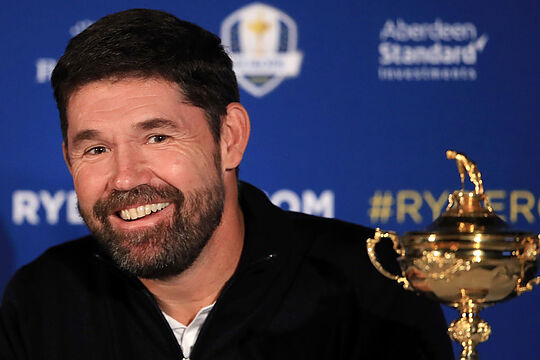 Now that the dust has settled Harrington put the USA triumph down what they learnt from Europe following their bitter demise at Gleneagles in 2004.

He said: “They now carry out everything we’ve learned. Europe showed how to seize the initiative and the States have caught on.”

“Every little bit of innovation that Europe has introduced to gain an edge, they have now. Even down to trying to put their weakest pairs against our strongest. That’s another statistical way of doing things.”

“All the little niches that Europe found as our strength were there last week at Whistling Straits. They just copied what Europe has done. Plus, they were a pretty good team to come up against.”

“It’s why it was hard to find the edge going forward. I’m not sure there is another edge. And we won’t know until we find it. That’s always the way”.

As a now former captain, Harrington will join the five-man European Ryder Cup committee where the events of last week will be talked over ahead of naming a 2023 European Team captain later this year.

Harrington said: “The de-briefing will not be based on the competitive side but focus more on the organisational side.

“I assume any competitive debrief will be with the next captain. I’ll ask him to be involved along with a vice-captain.

“Europe just has to do more of the same. We don’t need to change anything. That’s key. Two years is a long time in golf. We could be in the ascendency by then. They are on the right peak at the moment.

“Though for the U.S. to have so many players right at the top of the world rankings is not something we’ve seen for a long time. But in two years time that might not be the case.

“We’ve been very successful in Europe and we should just keep going forward with what we’re doing. There’s no need to panic. As strong as they are, time is a great leveller. There are always ebbs and flows.

“Though in saying that, it’s tough. There doesn’t seem to be any secrets now between both teams. They have it all now and they certainly put it into use.

“It will be interesting to see if they travel over to Rome for practice. They have sort of committed themselves to doing that”.

As for Harrington’s Ryder Cup legacy?

He said: “I did what I needed to do in the team room. The fact that my players are happy is all that counts for me. I was so worried that I wouldn’t do a good job.

“That’s the pressure and stress. But there is nothing we could have done differently. My team gave 100 percent pulling together. There’s nothing more I could have asked from them.

“From my perspective, I’m very comfortable saying there is nothing more we could have done. That was just the way it is.”