Harrington closed with a final round 69 for a one stroke victory over Y.E. Yang (66) at Norwood Hill Golf Club. 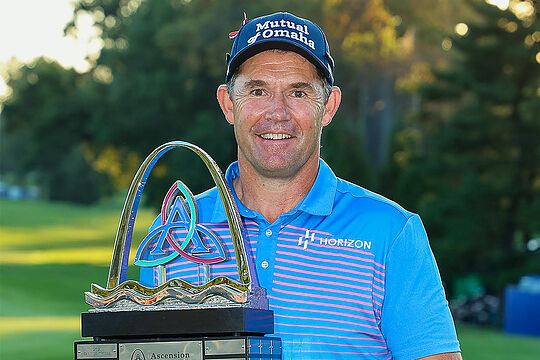 In his first season on the senior circuit, the 51-year-old Irishman is relishing the opportunity to apply his game and Sunday’s victory represented two wins in Harrington’s last three starts after he previously claimed the Dick’s Sporting Goods Open in August and the US Senior Open in June.

“I had done the work today, hit four wedges pretty stiff, had four eagle putts on top of that, so I had done all the work, I just had to get to the clubhouse and sometimes that’s just not that easy.”

With his run of good form Harrington is closing in on New Zealand’s Steve Alker in the Charles Schwab Cup Standings but still trails the 51-year-old, who also has three wins this year on the senior tour. Alker was victorious at the Rapiscan Systems Classic, Insperity Invitational and KitchenAid Senior PGA Championship.

Four tournaments remain before the Charles Schwab Cup playoffs start, and Alker’s lead is down to $134,778, meaning Harrington will have a chance to take the lead next week at the Sanford International in South Dakota. Alker finished in a share of 5th on Sunday, keeping a hold of the top-spot.

In an interesting comment from Harrington, although he did not join LIV Golf, he believes that LIV Golfers should play the majors.

“I strongly believe the majors should stay above everything,” Harrington said.

“I would not want to turn up at a major and not play against the best players in the world. They need to say, ‘We’re above all this.’ If LIV had world ranking points and these players were turning up I’d be protesting myself. But they need to protect their position and this is the only way.”

Stuart Appleby finished the top-Aussie on Sunday in a share of 41st position, followed by Rod Pampling and David McKenzie.