Padraig Harrington fired a closing round 1-over par 72 to claim the US Senior Open by a shot over Steve Stricker after the American finished with a blistering closing round of 65.

It was Harrington’s first US Senior Open and the Irishman managed to get the silverware in his maiden attempt. 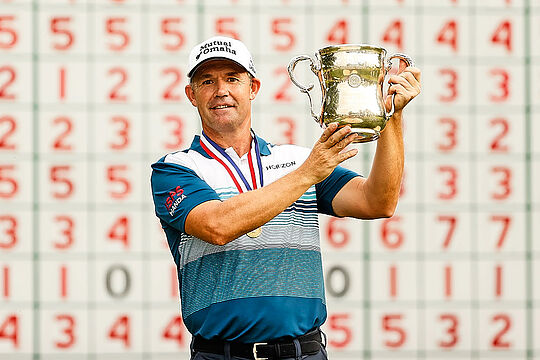 “I think it’s special for me to win this one just because I’ve never won a USGA event,” said Harrington. “I think that adds more than if you could turn around and win a different senior major.”

“But because I was never a US Open champion or a junior champion, it’s great to come and win the senior one. It adds something that I never had in my career.”

Stricker, the 2019 US Senior Open champion and four-time major winner on the Champions Tour, played even-par golf through six holes before reeling off six birdies in his final 12 holes to put the pressure on Harrington.

Harrington played the closing holes in tradesmen-like fashion to secure the victory, drawing on his years of professional experience in the process.

Aussie Mark Hensby, who just last week announced his retirement from golf at the end of this year, proved he’s still got what it takes to compete at the highest level finishing in 3rd place.

“I just want to inform everyone that this will be my last year competing no matter how the rest of my year goes while playing,” posted Hensby on Facebook.

“Golf has been my life for so many years and I’ve sacrificed so much to be a professional golfer. Golf has always been my life to an obsession and as much as I like competing there are way too many obstacles I just can’t and don’t want to deal with anymore.”

“As I said I really appreciate everyone who has supported me and the friendships I’ve been fortunate to have established through this great game.”

Hensby has six professional wins to his credit including the 2004 John Deere Classic along with a string of other top-10 PGA Tour finishes on his way to 15th place on the money list that year. In 2005, Hensby also finished 3rd at the US Open and shared 5th place at The Masters.

Rod Pampling had a solid championship finishing13th with Stuart Appleby in a share of 25th position. Richard Green and John Senden were 49th and 51st respectively with Gavin Coles 62nd.