Hashimoto makes it a double for Japan, Bennett T2

Japan’s outstanding year in golf continued when Mizuki Hashimoto shot a fourth successive round of four-under-par 68 to win the third edition of the Women’s Amateur Asia-Pacific (WAAP) championship by one stroke on the weekend.

At Abu Dhabi Golf Club, Hashimoto finished on a 16-under-par total of 272 and became the second successive Japanese champion after Yuka Yasuda lifted the trophy when it was last played in 2019.

Australia’s Kelsey Bennett (68) along with the Thai duo of Kan Bunnabodee (66) and overnight leader Natthakritta Vongtaveelap (72) were tied second at 15-under-par.

Nagano Inagaki (68), also of Japan finished fifth at 13-under-par, with Malaysia’s Ashley Lau (70) a shot further back in sixth.

In April this year, Japan’s Tsubasa Kajitani and Hideki Matsuyama were winners in back-to-back weeks at the Augusta National Women’s Amateur and The Masters and a similar pattern unfolded in the UAE with Keita Nakajima winning the Asia-Pacific Amateur Championship in Dubai last week. 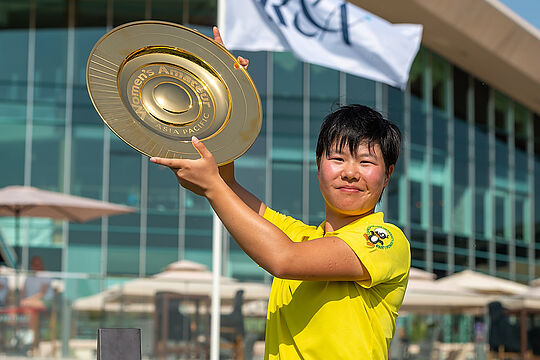 “I have always seen these tournaments on the television. To be able to play in them is like a dream-come-true for me,” said Hashimoto, the World No. 121.

“I feel so happy to win this championship. I would like to say a big thank you to my teammates and everyone who supported me all week.”

Apart from the beautiful trophy, the 19-year-old Hashimoto secured major championship places in next year’s AIG Women’s Open and the Amundi Evian Championship as well as the Hana Financial Group Championship and an invitation to play in the Augusta National Women’s Amateur.

Kelsey Bennett, who hails from Mollymook in New South Wales, carded rounds of 69, 67, 69 and 68 to finish just one shot off the pace. A double-bogey in her opening round proving very costly in the end.

“Today was really good. I was happy with the way I played. Obviously, a few more putts could have dropped but I held it very well. I was nervous coming in the last few holes. After the bogey on the first hole I was thinking it’s not very good but I managed to come back,” said Bennett.

Bennett has enjoyed a solid year with wins coming at the NT Women’s Amateur and Tasmanian Open Championship along with a string of top-10’s.