Hatton, who turns 25 later this week, posted a final round 66 for a tournament four round equalling low of 23-under par in calm conditions on the famed Old Course. 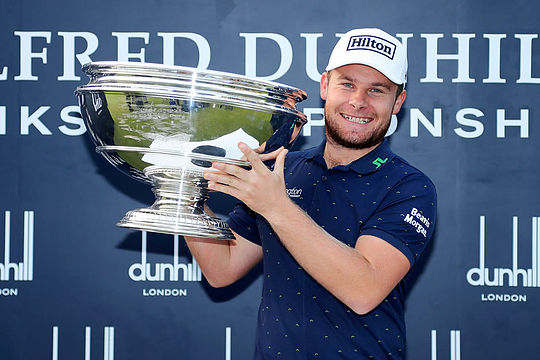 It was Hatton’s 83rd European Tour event and he becomes the 15th different winner in the 16-year history of the Scottish event.

However, in receiving the €711,073 first prize cheque Hatton spoke of dreaming of his first pro career triumph since being taken by his father, Jeff to the 1997 BMW PGA Championship at Wentworth some 30-minute drive from the family home at Marlow.

“Ever since I was a six years old when my dad took me to Wentworth, I’ve dreamed of this day,” he said.

“My dad has also been my coach since I was 11-years of age so I have to say a big thank you to him as he’s helped me so much, and he’s got an indoor golf studio back home in Marlow so without his input it would have been impossible for me to be standing here now with this trophy.”

Hatton, who was contesting his 83rd Tour event, kick-started this season in finishing runner-up in July’s Scottish Open before then sharing fifth place a week later in his first appearance in the Open Championship.

“My second place result in the Scottish Open was an important week at it not only got me into my first Open a week later but also two weeks later into the PGA Championship,” he said.

“That result just kick-started my good run of events.

“Also I was 53rd in the world coming into this week and I’ve been told I should move to No. 35 and if I can stay inside the top-50 by the end of the year, that will then mean playing in my first Masters next April.”

“So I’m very excited at that prospect as it would fantastic but more importantly I want to improve my ranking in what events I have left this season.”

South Africa’s Richard Sterne (66) and England’s Ross Fisher (67) shared second place on 19-under par while double Major winning Martin Kaymer, and winner of the event in 2010, could only manage a 69 to finish sixth at 15-under par.

And there was some joy for Masters champion, Danny Willett after an indifferent fortnight either side of the Atlantic.

Willett, who had badly missed the cut over the opening three rounds, teamed with his regular caddy and amateur partner, Jonathan Smart, to post a combined 12-under par 60 over the last day to win the pro/amateur prize by a shot at 30-under par.

Smart had also caddied when Willett won at Augusta and to celebrate Willett’s win had worn his ‘Augusta National’ white boiler caddy suit to greet workers at his parent’s security business in Yorkshire.

“I have to thank Jon as he carried me all week,” said Willett.

And Willett, in the absence of nearest rivals Henrik Stenson and Rory McIlroy, remains top of the Race to Dubai money list while Hatton has moved from ninth to fourth place.