Hatton drives away with four-shot win at BMW PGA

England’s Tyrrell Hatton was virtually in a class of his own in comfortably driving away with a four shot victory in the BMW PGA Championship at Wentworth.

Hatton, 28, won a fifth European Tour victory and a ninth pro career success in posting a closing round 67 for a 19-under par tally in the $7m Rolex Series event over the famed ‘Burma Road’ course.

It also seemed appropriate the expected new World No. 9 was the only player over the four days to post four rounds in the 60s after earlier scores of 66, 67 and 69.

Hatton had won four times prior on the European Tour and now a fifth, and each in either October or November. Earlier this year, the Englishman held off 2017 BMW champ, Australia’s Marc Leishman to capture the Arnold Palmer Invitational in Orlando.

And making his BMW PGA success all that more special for Hatton was the fact that his father, Ron had taken his then five-year old son to a first BMW PGA Championship in 1997.

What’s In The Bag: Tyrrell Hatton

“It’s very special to be standing here holding this. It’s been a dream of mine since I was a kid to play the tournament and hopefully win it one day, and thankfully this year is my year,” said Hatton, who spoke to his parents via a special video hook-up moments after claiming victory.

“The last few holes, I didn’t know exactly where I stood. I was really nervous playing the last few, but once I fatted my second shot and we got very lucky that it didn’t go in the water, I found out that I had a three-shot lead, so that settled me down a little bit. It was nice to get up-and-down after a terrible golf shot.” 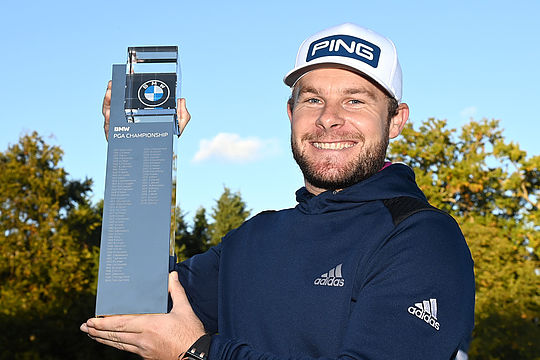 “Although I didn’t know that I had a three-shot lead playing the last hole, I was pretty nervous there, and the second shot that we’ve hit into the last is probably the worst shot in the history of the tournament for the champion.

“So it is what it is. I’m kind of glad that I followed it up with a nice up-and-down. My short game has been really good all week, and just a nice way to sign off.”

Though it was not all plain sailing for Hatton and we heard the Englishman berate himself a couple of times including missing a birdie putt on the 14th when TV coverage picked-up him saying: “That is rubbish. Why it is (the putt) turning that way. I can’t hit a better putt.”

Then at the last he played a real shocker of a second shot into the par-5 18th and was lucky not to find the water and we heard Hatton declare: “That was perhaps the worst second shot struck by the eventual winner in the history of the event”.

And with nine pro career victories to his credit since first turning pro in 2011, we asked Hatton what was the strength of his character that made him such a tough competitor.

“Some weeks, it’s your week and you need a little bit of luck along the way, and I think each year I’ve played on The European Tour, you just have that bit more experience, and the biggest thing for me is just not getting in my own way, and if I can do that, then hopefully I should be able to play well and give someone a good game coming down the stretch,” he said.

Frenchman Victor Perez was runner-up signing for a closing 68 for a 15-under par tally, and an effort that should send the Scotland-based Perez back inside the top-50 in the rankings.

Veteran Scott Hend finished the best of the Australians in a share of 10th with only a Saturday 73 robbing him of a possible runner-up finish.

Wade Ormsby was the only other Aussie to make the cut in 54th place.