England’s Tyrrell Hatton delivered himself an early birthday gift shooting a final round 66 for a three-shot 24-under par victory total and became the first player to successfully defend the Alfred Dunhill Links Championship in Scotland.

Hatton, who turns 26 next Saturday, moves to World No. 22 while he’s also jumped from 33rd to 11th on the Race to Dubai money list. 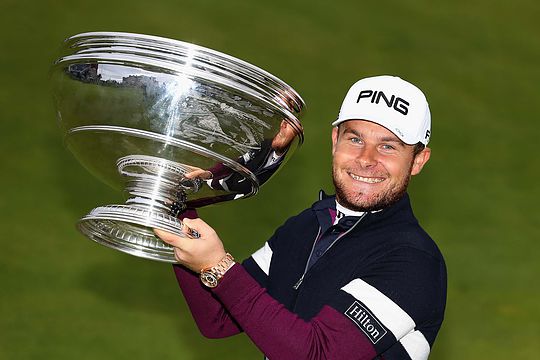 “It is an unbelievable feeling as this week was the first time I had ever defended a title or had the challenge to try and do it so it felt like it was a lot harder today this year, well, winning this year, than it was last year,” he said.

“I’m so happy that I managed to get over the line.”

“I know one thing also that this is one big, heavy trophy. My left arm is going to be sore tomorrow (smiling).”

Fellow Englishman Ross Fisher produced a new Old Course record of an 11-under par 61 to finish in second place at 21-under par.

The 35-year old and five-time Tour winner was staring at the first-ever score of 59 on the European Tour when Fisher sent his drive just short of the green at the last.

Fisher, needing to then hole his eagle putt for the 59 put his second to just a few feet before the despair of missing his birdie putt that would have handed him a 60.

He birdied all but two of his outward nine holes and then managed four birdies in succession from the 12th over his inward half.

“I’m gutted I miss that one on the last but it just one of those days as I felt like I was playing alright but I’m not going to complain too much with a 61,” he said.

Frenchman Victor Dubuisson stormed his way to third place in recording a 63 for a 17-under par total and his best finish in 11 months since a similar result in the Nedbank Challenge in South Africa.

The 27-year old Antibes golfer capped his round also with seven outward half birdies.

England’s Tommy Fleetwood continues to lead the Race to Dubai in recording a final day 69 for a 10-under par tally and a share of 25th place.

And four-time Major winning Rory McIlroy ended his first winless season since 2009 with a final round 72 for a distant share of 63rd place.

McIlroy will now take three months before returning to competition in mid-January.

“Not much happening, good or bad. Just sort of stuck in neutral. Yeah, hasn’t been the year I wanted on the golf course.”

Rhein Gibson was the surprise leader of the Aussie pack this week after firing a final round 4-under 68 to claim equal 25th place at 10-under.

Jason Scrivener (T47) and Matt Giles (66) were the only other two to make it through the three-round cut.