England’s Tyrrell Hatton birdied the 18th to claim his second victory in as many weeks with a one-shot win over Ross Fisher at the Italian Open on Sunday.

The 26-year-old and new world number 17 holed a putt from 15 feet on the final green to card a final round a six-under 65 to finish on 21-under. 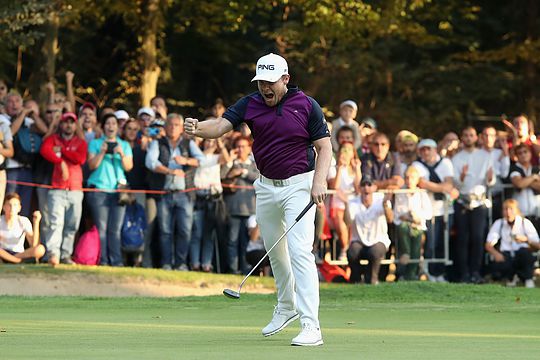 Last week at the Dunhill Links, Hatton denied Fisher the winners cheque who was again second despite closing with a fine 63. In a four-tournament run Hatton has secured two titles, a third and an eighth and sees him banking more than AUS$2 million in prize money in just eight days.

If anything the Englishman has shown over the last fortnight tremendous fighting qualities and the capacity get the job done.

On Sunday, Hatton was four behind the Thai Kiradeck Aphibarnrat going into the back nine, yet put on a wonderful putting display nailing four birdies in a row from the 12th and having levelled with Aphibarnrat and Fisher on 20 under, he then stepped on to the 18th tee needing a birdie three for the win.

“I was fighting so hard to stay patient, I just can’t believe I have won again,” said Hatton.

“I didn’t see a leaderboard so I didn’t know where the leaders were, but I holed some putts and it was an amazing feeling to see that one drop at the 18th.”

The victory sees him move into the world’s top-20 and moves his total for his past eight rounds to 45-under par. Add to this his third place at the British Masters and eighth at the European Masters in September and it completes an astonishing turnaround in fortunes since he missed the cut in six of seven events earlier last season.

Marcus Fraser was the best of the Australians finishing in 5th position at 18-under, a second round 62 elevating Fraser into contention before closing with rounds of 72-65.

Sam Brazel was the last Aussie to make the weekend but finished well down the leaderboard at 3-over. Nathan Holman, Jason Scrivener and Andrew Dodt all missed the 2-under-par cut mark.