(Orlando, FL:) England’s Tyrrell Hatton has left embattled US TV analyst Paul Azinger chocking on his words after holding his nerve to capture the Arnold Palmer Invitational at Bay Hill in Florida.

Hatton, who is still struggling with a post-Mexico City stomach bug, posted a final day 74 to capture his maiden PGA Tour victory by a shot from Australia’s Marc Leishman with a four-under par tally.

The win comes just a week after former Tour player and NBC golf analyst Azinger belittled the careers of both Lee Westwood and Tommy Fleetwood as not being good enough to win on the PGA Tour.

Hatton, competing in his 60th Tour start, looked shaky after taking a double-bogey on 11 but superbly held his nerve to par his remaining seven holes.

“It’s an incredible feeling to win at such an iconic venue and with obviously Arnie’s name to it,” said Hatton.

“I think whatever TOUR you play on it’s extremely hard to win golf tournaments and we’re all trying to do that each week,” said Hatton when asked about the recent Azinger controversy. 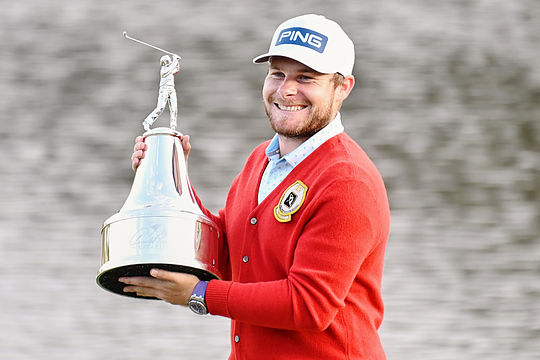 “Obviously I was getting frustrated at times, but nowhere near the blowups that I am capable of. And it’s just one of those days where you just got to stick in there, and patience is one of the hardest things with me.”

“3-over for the weekend and that ended up winning the tournament. If you told me that on Friday night I wouldn’t have believed you.”

Hatton, a four-time European Tour winner, came into the final round with a two stroke lead over Rory McIlroy, Marc Leishman and Sungjae Im – all of whom had won on the PGA Tour this season.

However with neither player able to break par in the tough conditions, Hatton’s 2-over 74 was good enough on the day when the average score was 75.06 across the field – the highest here since 1983.

While Rory McIlroy’s 76 was his highest final round score in a PGA Tour event since the 2013 US Open, the good news is that he still finished fifth and kept his impressive top-5 streak alive dating back to his Tour Championship win in late August 2019.

“I just have to keep telling myself the game’s there. I think if I am going to keep getting myself into contention like I am, I just need to sort of stop making those big number,” said McIlroy.

“I’ve had chances and I wish I had converted one of them over the last few weeks, but I’m still in good form. I’m playing some good golf. And hopefully if I just keep putting myself in those positions, it’s only a matter of time.”

Matt Jones was the next best of the Australians after falling out of contention with a horror final round 9-over 81 while Adam Scott surprisingly missed the cut following an opening round 77.

Jason Day withdrew from the tournament while playing his second round citing ongoing back problems.

Day, who now has nine WD’s on the PGA Tour, looks in doubt for this week’s Players Championship after only returning from a two-month injury break earlier this year. He played well at the AT&T Pebble Beach with an outright 4th placing but missed the cut at the Genesis Invitational the following week.