On a day of surprise, there was no-one more surprised than Tyrrell Hatton to be left standing holding the gleaming Turkish Airlines Open victory trophy.

Hatton entered round four in glorious sunshine three shots off the lead but ended it as the last man standing in a six-man playoff under floodlights and a near full moon to shine the brightest on the Montgomerie Maxx Royal course in Belek. 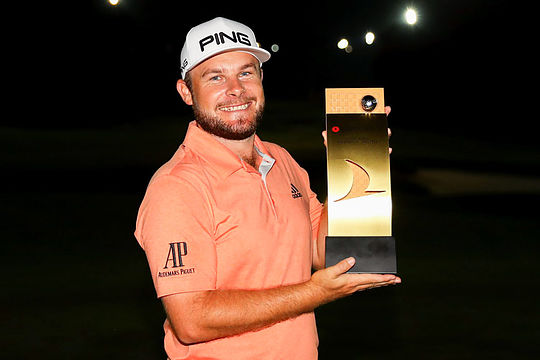 A birdie on the 72nd hole handed him a closing 67 and a place in the record equalling play-off alongside French duo Benjamin Hebert and Victor Perez, American Kurt Kitayama, Austrian Matthias Schwab and South African Erik van Rooyen.

It was the first occasion since 1990 six players were involved in a play-off on the European Tour.

He had to chip-in to keep his hopes alive on the first trip back up the 18th hole as Hebert, Perez and van Rooyen were eliminated on the first extra hole.

Kitayama stayed in the hunt before he was eliminated on the third extra hole, leaving Hatton and Schwab to fight it out under the floodlights for the US$2 million first prize.

Hatton found trouble with his drive and was forced to lay-up before finding the green.

It left Schwab needing to hole his four-footer for birdie to send the duo back down the 18th only for the Austrian to horribly miss his par putt to hand Hatton the task of tapping-in for a winning par.

“It’s so surreal. I mean, I actually can’t believe that I’ve won. It’s been quite a difficult year in terms of things happening off course, and you know, the last month, I feel like I really found my game again,” said Hatton.

“I said to a few people on my team that if I was lucky enough to win again, then I would definitely savour the moment, because I think it’s quite easy to take it for granted, and you know, sport’s great when it’s going well, but when it’s not going well, it kind of hits home, so I’m absolutely thrilled.”

Jason Scrivener topped the small Aussie field in a share of 21st at 13-under while Scott Hend was 36th place and Wade Ormsby 38th.

The European Tour heads to South Africa for its penultimate event of the season with the Nedbank Challenge.