Some light has finally shone through in what had been a bleak and sad year for Sunshine Coast golfer David Rattray.

Rattray recently won his second Headland Golf Club Championship in four starts, helping to ease some of the pain of losing three of his closest golfing buddies during the Christchurch earthquakes back in February. 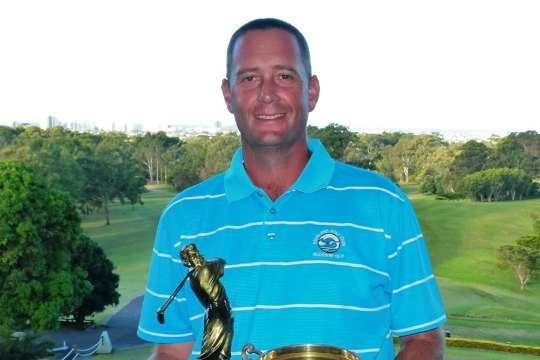 “They were close mates. We would play together most Saturdays when I lived in Christchurch,” said the expat Kiwi.

The three young men were killed in different incidents on February 22. Two of them were at work in buildings that were destroyed and the third was killed walking down the street.

“The shock of hearing this kind of news is something I don’t want to experience again in my life. It really rattled me and has given me a different perspective on life,” he said.

The four young men had played golf together at Russley Golf Club in Christchurch which, was unaffected by the earthquake. But the greens at Avondale Golf Club, where Rattray once worked on the ground staff, were lifted and disfigured so badly that they cannot be used any longer.

Another Christchurch course the mates played was Shirley Links, which lost its clubhouse in the earthquake.

At first the 2010 Queensland champion of champions stopped playing golf, but then thought that was not what his mates would have wanted.

“I felt really, really flat. My first reaction was that I wanted to go back to Christchurch but I know that would not have achieved anything,” he said.

“But then I pulled myself together, realised my mates will never play golf again so I might as well do my bit to keep things going for us. It was nice to win the Headland championships with them in the back of my mind.”

The one marker says Headland is one of the toughest member’s layouts he has played and was particularly difficult over the two June weekends of the championships.

“The wind was blowing a gale on the first day and the greens were slick throughout. It was treacherous at times trying to hit the ball close to the flag,” he said.

“As it should be, the course was set up really tough for the championships and pin placements were difficult. I can understand why scores around here have traditionally been high.”

The last Headland club champion to shoot under par was Craig Jones, who fired a six-under par 282 to win in 1988.

With a six-year-old son and a job as a greenkeeper on the parks and gardens staff of Sunshine Coast Regional Council, Rattray now only plays golf on Saturdays.

However he did captain the Hedland A Grade pennants team which finished one match short of a semi-final berth.