Starting her final round leading by a shot from fellow South Australian state representative Sarah King, Heard completed her win by 1-shot from a fast finishing Grace Lennon. 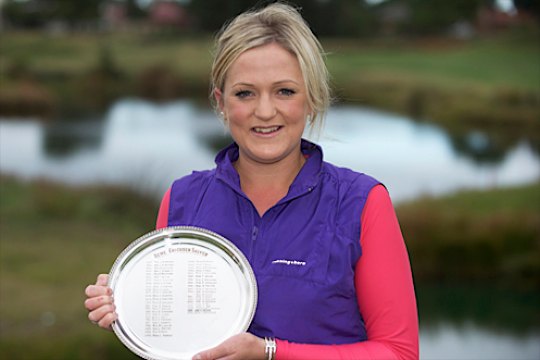 “It feels great to have won,” said Heard of her maiden Salver victory.

“I didn’t feel like I hit the ball that well but I certainly chipped and putted well which was good.”

In what proved to be an exciting finish to the 2011 Salver, it was Lennon (Kingston Heath) who provided the major challenge to Heard on the final day, carding the only under par score of the week with an excellent final round 1-under par 73.

Playing in the group ahead of Heard, Lennon completed a flawless front nine with birdies on the 3rd, 5th and 9th to make the turn in 3-under par 36. A triple bogey 6 on the par-3 14th halted her progress although birdies at the 16th and 18th for an inward 2-over par 37 left her as the clubhouse leader.

On the final day Heard showed a degree of consistency missing from her earlier rounds, completed the outward nine in 2-over par 41 with 3 bogeys against a single par and then completed an even par back nine for a 2-over par round of 76.

Unaware of Lennon’s excellent round unfolding ahead of her, Heard completed the 18th in empathic style, executing a perfect pitch shot from the front of the green set up a short birdie putt which she duly converted for her one-shot win.

“I actually used three sets of irons during the week which I’ve been struggling with and my tee shots had been getting me into trouble over the first couple of days,” said Heard.

“I spoke to my coach about that and drove the ball much better over the last two rounds.”

Heard finished the tournament on 12-over par 308 with Lennon finishing alone in second on 309. Royal Adelaide’s Sarah King slumped to a final round 8-over par 82 to finish in third on 315, with Carly Beck (316, The Australian) and Hayley Bettencourt (318, Mandurah) rounding out the top five.