Heavy rain may force Tour to reduce BMW to 54-holes

(Newton Square, PA) PGA Tour officials remain sceptical of completing the final round after continuing rain ruined any chance of a start to play Sunday at the BMW Championship in suburban Philadelphia.

More than three inches of rain since late on Thursday night has drenched the host Aronimink course and it was still raining when at 2pm local time players were advised of the decision. 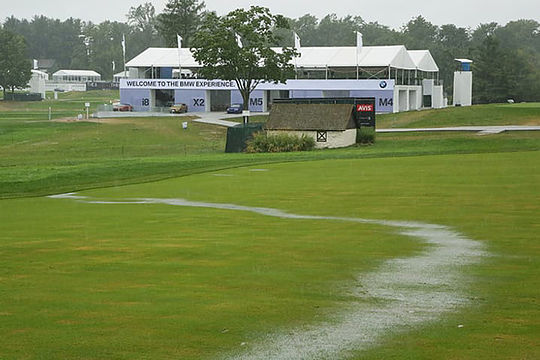 The Tour will attempt to start the final round at 7am Monday local time with a two-tee start and the 69 remaining players in the $9m event to be grouped in three balls.

“It’s like we are kind of having to shovel sand against the tide, unfortunately, and that’s the sad part,” said Tour official, ‘Slugger’ White.

“The fairways are Iffy fairways and the tee boxes sloshy. The greens are fine, the bunkers were okay. We just have a golf course that we just couldn’t play. We can’t push water around and we’ve gotten over three inches of rain since last night and today right about now.”

“We will do everything we can to play tomorrow (Monday) but we have to wait and see what Mother Nature gives us,” White added.

“We just have to wait until in the morning to see exactly what we’re going to have to try to do.”

England’s Justin Rose enjoys a one-shot lead at 17-under par and should he succeed in capturing what would be his third Tour title in Philadelphia, he would go to No. 1 in the world.

But there are other issues at stake with American Xander Schauffele tied with Rory McIlroy in second place on 16-under and just a shot adrift of Rose. Should Schauffele win he could more-than-likely secure the very last USA Ryder Cup ‘wildcard’ pick.

US Team Captain, Jim Furyk was set to make that announcement at 9am Monday US local time but that is now up-in-the-air given the tournament is heading for a Monday finish.

As well, Tour organisers need to determine the leading 30 players on the FedEx Cup standings who will qualify for next fortnight’s season-ending Tour Championship in Atlanta.

With this in mind, there is the bizarre scenario staring at three-time Major winning Jordan Spieth should no play take place on Monday.

The Texan is currently tied 27th in the tournament and projected to drop from his current FedEx Cup standing of 27th to 31st, one place shy of not qualifying for Atlanta.

Spieth is also facing the issue of not having played the minimum number of 25 events he needs to qualify for the Tour Championship to do so or face a Tour fine.

The BMW Championship is Spieth’s 23rd Tour-counting event of the season while his appearance later this month in the Ryder Cup will also count towards the 25.

“We will do everything we can to play tomorrow (Mon) but we’ll just see what Mother Nature gives us,” White added.

“We just have to wait until in the morning to see exactly what we’re going to have to try to do.”

It will be the third PGA Tour Monday finish this season after Australia’s Jason Day and Sweden’s Alex Noren returned earlier this year for Day to capture the Farmers Insurance Open at Torrey Pines, California.

And American Troy Merritt won on a Monday to capture last July’s Barbasol Championship in Kentucky.