Denmark’s Marcus Helligkilde claimed his second European Challenge Tour title in the space of seven weeks when he took out the Swiss Challenge at Golf Saint Apollinaire.

Starting the final round three strokes ahead of fellow countryman Nicolai Kristensen and England’s Jonathan Thomson after a third round of 62, Helligkilde fired a closing 69 to finish at 25-under and a stroke victory over Kristensen and Thomson. 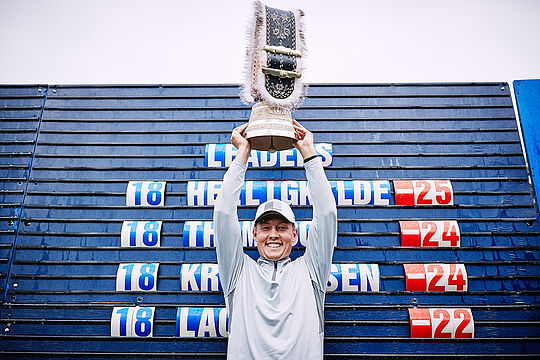 “I could definitely feel the pressure, it helps quite a bit when you can play with a mate in Nicolai, and I think we both enjoyed it and we both just did our best and I came out on top and I’m grateful for that,” said Helligkilde.

Helligkilde moves four spots on the Road to Mallorca Rankings sitting in third position behind Santiago Tarrio and Ricardo Gouveia who have also both sealed two Challenge Tour victories in 2021.

Blake Windred moved five places on Sunday after a closing round of 68 to finish in a share of 10th position, his third top-10 result to date this season which now has Windred 35th on the Challenge Tour ranking and the highest ranked Aussie.

The highlight of the week came when Spain’s Alejandro del Ray fired a 58. There has been just one 58 recorded in PGA Tour history, Jim Furyk in 2016, but Del Rey became the first to post a 14-under-par score on a major tour with his scorecard including eight birdies and three eagles.

In addition to Furyk’s 58 at the 2016 Travelers Championship, Stephan Jaeger (Korn Ferry Tour), Ryo Ishikawa (Japan Tour), and Jason Bohn (Canadian Tour) have all shot 58. But again, none came on a par-72 course.

The European Challenge Tour now moves to Spain with the Empordà Challenge at Empordà Golf taking place from October 14-17.