Scott Hend was left agonising after missing out on a playoff victory for the second year in succession at the European Masters in Switzerland.

Hend, who had led unchallenged for three days, was bumped off the Swiss summit by Englishman Matthew Fitzpatrick, who won with a par the third extra hole on the Crans-sur-Sierre course. 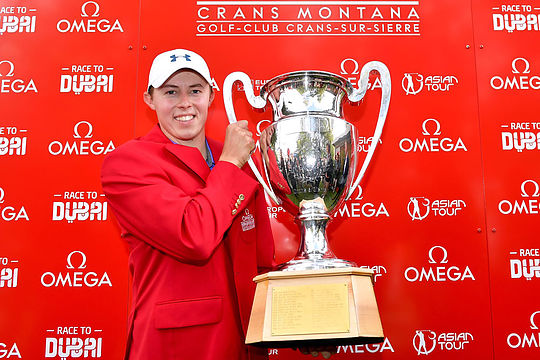 The Queenslander, just like he had done 12 months ago, went into the final day leading by a stroke only to again see his rival fitted with the traditional red winner’s jacket and handed the gleaming silver trophy.

Hend and his caddying wife, Leanne travelled back down the mountain making their way to Geneva Airport rueing a number of missed opportunities but none more so than his just over one metre birdie attempt at the second extra hole that failed to even hit the hole.

Earlier, Hend had returned to the course at 8am local time to complete the closing five holes of his third round and he did so brilliantly driving the green at the par five 14th, having walked from the course in near darkness on Saturday after a much-needed birdie at the par three, 13th.

The World No.98 then gave back a shot at the 15th before ending with three pars and a round of 71 to lead by one. Fitzpatrick had shot a 70 to be four back of Hend.

Hend got his fourth round off to an indifferent start with back-to-back bogeys at the third and fourth holes before birdieing the fifth, seventh and ninth holes.

While Fitzpatrick loomed large in the Aussie’s rear-view mirror with three birdies in succession from the sixth and then a fourth of his day at the 10th.

Both players just missed birdie putts to end regulation play with Hend carding a three-under 68 and Fitzpatrick, who had been in the penultimate group, producing an equal-best on the last day of a 64 to sit in a tie at 14-under.

Following pars at the first two playoff holes, it was the third hole that would decide the tournament where an indifferent putt from Hend left him still behind Fitzpatrick’s par attempt from where he bogeyed, leaving Fitzpatrick to claim a fourth European Tour title.

“I had the opportunity and I didn’t take it,” said Hend.

“It’s just what happens when you don’t take your opportunities. I hit a good bunker shot on the 18th in regulation play to get into the play-off. I hit that shot when I came back to finish my third round this morning.”

“It was just insane out of the bunker. I would love to putt the same way I did in the playoff but it didn’t happen.”

“I came back this morning to play the 14th hole of my third round and I made a nice eagle there. It was a good start to the day. I didn’t play as nicely in the afternoon but it is what it is. Fitzpatrick played great to win. He’s a good champion.”

Fitzpatrick had finished in the top ten at this event the last two years and this was the second time he had been involved in a final-day shoot-out after losing to countryman Danny Willett by a single shot in 2015.

“I’m delighted,” he said. “It’s one that I’ve always wanted to win. I love playing this golf course, from the first ever year I came as an invite in 2014 it’s one that has really stood out on my schedule and I always want to come back and play.”

“I was saying to (caddie) Jamie, ‘I think 17 might have cost us today’ but it’s just one of those things. It’s never nice to see but we kept our nerve and just played really smart all week.”

“I remember being here in 2015 when Dan won and his parents were there to see him win so it’s nice to have mine here too. It’s the third win they’ve seen me achieve so it’s pretty special.”

Hend’s reward was a €300,000 prize cheque that has lifted him to 31st on the Race of Dubai and the assurance of contesting the season-ending DP World Tour Championship for the second year running.

Also Hend’s effort should see him jump to around 80th on the World Rankings.

Marcus Fraser fell away on the final day with a 2-over 72 seeing him drop in to equal 20th place. Todd Sinnott failed to capitalise on brilliant opening rounds of 65 and 66 finishing in a tie for 44th following a final round 4-over 74.