Australian Scott Hend responded quickly to an average performance by his recent standards at last week’s WGC-Cadillac Championship to hold off a fast-finishing Piya Swangarunporn of Thailand to win the True Thailand Classic by a shot on Sunday.

The 42-year-old Hend birdied the 14th and 17th holes for a closing four-under-par 68 and an 18-under-par 270 total at Black Mountain Golf Club in Hua Hin, after Piya had flown home in a course record 63. 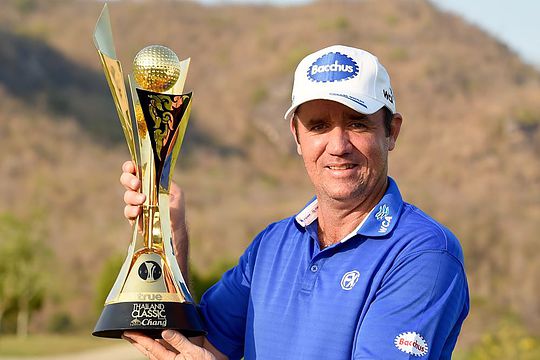 Belgium’s Thomas Pieters took out third place following a 68, three strokes behind Hend, while American Peter Uihlein was a further stroke back in fourth after a 70.

“Last week was extremely disappointing and somewhat deflating. I knew I was swinging the club pretty good.”

This was Hend’s eighth Asian Tour victory and second European Tour title, which will propel the Queenslander well into the world’s top 100 ranked players.

“This is a great win and I would love to try and kick on now and get another win, try and qualify for the Open and also try and get into the match play and see if I can do anything against the top 50 in the world.”

Piya, who had finished top-three at the Black Mountain Masters here in 2010, was delighted with his title run after starting the final day six off the lead.

“Today was one of the best rounds I have ever played. Everything about the game was good and it all came together for me,” he said. “It is a big day for my career and I hope to play more big tournaments like this one in the future because this week has given me a lot of confidence.

Apart from Hend, it was largely slim pickings for the Australians in the field with Kalem Richardson the next best placed at five-under par in a tie for 40th. Jason Scrivener tied for 54th ahead of Sam Brazel (T61st) and Wade Ormsby (T67th).

The European Tour heads this week to the Delhi Golf Club for the Hero Indian Open, another event jointly sanctioned with the Asian Tour, that will feature a field that includes Hend, Uihlein, Padraig Harrington, Marcus Fraser, Joost Luiten and local star Anirban Lahiri.