Australia’s Scott Hend was the last man standing as Typhoon Fitow wreaked havoc during the final round, winning the US$600,000 Mercuries Taiwan Masters at the Taiwan Golf and Country Club on Sunday.

With rain and winds gusting up to 55mph, the Florida-based Australian posted a two-over 74 to win his second title of the year and his fourth overall on the Asian Tour with a winning total of three-under-285. 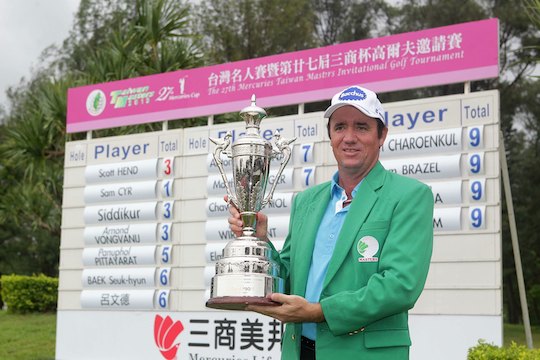 Sam Cyr of the United States enjoyed his best result on the Asian Tour this season with a second placed finish, four strokes behind Hend, while Bangladesh’s Siddikur and Thailand’s Arnond Vongvanij shared third place on 291.

“It’s nice to win from the front instead of always coming from behind.” Hend said, “To be able to win this tournament was always a tough mental challenge, especially under those conditions we had this week.”

Having been exposed to the elements in Scotland at last week’s Alfred Dunhill Championship, the 40-year-old was well prepared for his windy week in Chinese Taipei.

“I got my wish when I saw how windy it was out here. It worked to my favour as I played in Scotland last week and I was mentally prepared,” he said, “I wanted the wind to blow but I didn’t want it to blow that hard.”

“I thought if the wind blows, it’ll be hard for somebody to shoot in the low 60s and try to catch me.”

Hend’s US$120,000 winner’s cheque lifted him to second place on the Asia Tour Order of Merit with season earnings of $393,128, behind Thailand’s Kiradech Aphirbarnrat.

The Asian Tour continues at the CJ Invitational Hosted by KJ Choi in Seoul, Korea next week, where the host will be aiming for a third consecutive title.