While several Australians were in contention for the last round of the British Open, Scott Hend wasn’t one of them.

And the long-hitting Queenslander was reportedly filthy on the R&A for robbing him of his opportunity to be a contender. 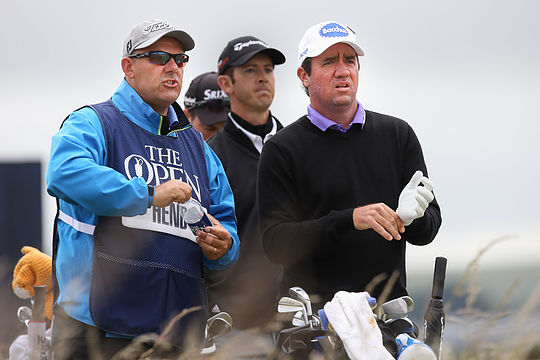 Hend missed the half-way cut by just two shots and blamed the R&A for costing him the double-bogey that saw him miss the weekend by those two very shots.

Forcing players to tee off in 70kph winds was a decision that Hend branded an “absolute disgrace” after he was one of the groups directed to resume play in the second round when Hend said conditions clearly were unplayable.

Hend shot an even-par 72 to just miss the cut but was livid at missing the weekend.

“They [the R&A] want to come out with a diatribe that the wind picked up 10-15 per cent once they blew the horn, but that’s absolutely ridiculous,” Hend said.

“We were out there and told them it was no good. I make double-bogey on the one hole that I play and I miss the cut by two shots.

“We kept saying to our rules guy that this is not fair and we shouldn’t be playing.”

“We get to the ninth tee and he finally said to us, ‘Hold up fellas, there’s going to be a back-up on the 10th tee’, so we stood and waited.

“He got a message from his boss in charge of the rules who said something like, ‘Why is your group not playing nine, make ‘em hit’.”

“It was an absolute shambles and didn’t seem like anyone knew what was going on — it was very unprofessional.”

“We know as professional golfers what’s playable and what isn’t.”

“We play around here in the Dunhill, so we know when it’s playable and when it’s not — and that just wasn’t. Clearly we should never have been out there.”

R&A chief executive Peter Dawson defended the decision – but also admitted play should not have started.

“Clearly, with the benefit of hindsight, it would have been better if play hadn’t started, but the decision was taken based on the evidence at the time,” he said.