Hend fires 64 and eyes off PGA spot at Irish Open

Big-hitting Scott Hend equalled the course record as he not only strives to capture a third Tour title with victory at the Irish Open but to qualify for next month’s PGA Championship.

The 44-year-old eagled the 15th and grabbed six birdies in a superb bogey-free 8-under score in ideal conditions at Portstewart. 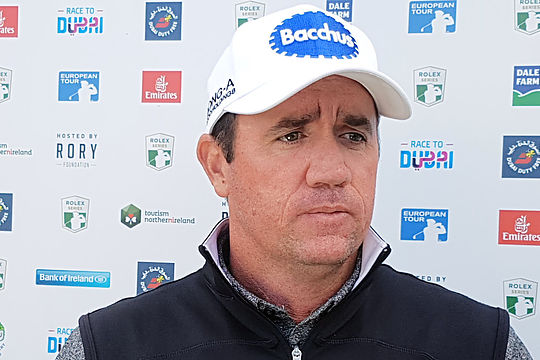 The effort, with Hend wearing stylish pink tipped shoes, matched the rounds of American Daniel Im and Frenchman Benjamin Herbert on day one of the event.

With a round to play in the $US 7m event, Hend finds himself sharing sixth place and only four strokes from the leading duo of Jon Rahm and Daniel Im.

However, it was less than an hour after Hend’s round that a second Frenchman, Julian Quesne seized nine birdies, in the ideal scoring conditions, to match Hend, Im and Herbert.

Coincidentally, Quesne and Herbert are sharing a house this week in Portstewart with compatriots Gregory Havret and Raphael Jacquelin.

Hend’s effort is also his equal-lowest on the Tour with four prior rounds of 64 with the last being a 7-under 64 at the 2016 KLM Open.

“Given the conditions, the golf course today was there to be had,” said Hend.

“So, eight-under was a good score but I expect the leaders to finish somewhere around the 17 and 18-under mark by the end of the day.”

“The first two days here I did not hole any putts and today it was like I holed everything.”

“But then if I can go out there on the last day and throw a little seven or another eight-under in there, then you never know given the forecast tomorrow as it does not look all that inviting with pretty dirty weather.”

And having contested just a first PGA Championship a year ago the Florida-based Aussie is keen to get back inside the top-100 and be assured of teeing-up at Quail Hollow on August 10.

“I would just love to contest the PGA Championship as Quail Hollow is just one of my favourite golf courses in the US but then I am not too sure when the cut-off date is,” he said.

“So, that is the big gaol this week to get myself back and inside the top-100.”

“I have also the chance next fortnight at The Open but if I can have a good last round here in Ireland and take this form across to Scotland then you never know.”

As Hend indicated, he is exempt into the July 20th starting Open and in what will be his third showing in golf’s oldest Major having made his debut in 2005 at St. Andrews and teeing up the past two years.

However, the affable Aussie is yet to make the cut.

“It would be great to do well at Royal Birkdale as I have never played the course but the main thoughts continue to be in the present and get back inside the top-100,” he said.