Scott Hend produced a timely birdie to regain his two-shot lead just moments after the siren sounded to halt play on day three of the rain-affected European Masters.

Hend showed his delight in holing a two-metre birdie putt at the par three, 13th hole by throwing both arms into air after his move back to 11-under on the Crans-sur-Sierre high in the Swiss Alps. 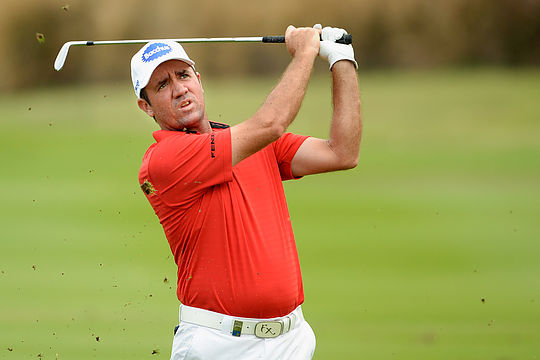 Play had first been halted at 2.36pm due to fog and rain and did not resume until 5pm local time.

Hend then went to 14-under playing a great iron shot from the left rough to some two-metres from where he holed out for a ’3′ and only play a couple more holes when the round was suspended.

However, Hend returned looking shaky for the first time all week and after bogeys at the fourth and eighth holes he continued to wobble with back-to-back bogeys at 11 and 12.

It was little wonder then, and with the light fading quickly, Scott was pleased to birdie the 13th for the second time in three days.

Weather-permitting the third round will resume at 8am Sunday local time ahead of the fourth and final round starting at 9.55am local time.

Hend is not only looking to secure his third European Tour title but make amends in losing out in a play-off here with Alex Noren a year ago.

If successful, Hend will become the sixth Australian winner of the event first contested as the Swiss Open in 1923 with the last being Perth’s Brett Rumford in 2007.

Rumford shot a third day 69 for a one-under tally.

Marcus Fraser produced his lowest score in signing for a 66, and that included an 18th hole birdie for the third day running, to end his round at eight-under par and then share of fifth place at eight-under par.

Just a shot back from Melbourne’s Todd Sinnott who birdied the par five, 14th also for the third day in succession to be tied with Fraser but with four holes still to play.