Australian Scott Hend claimed a second Venetian Macao Open victory in three years after holding off title holder Anirban Lahiri and Chiragh Kumar of India with an impressive final round of five-under-par 66 on Sunday.

Big-hitting Hend cruised to a three-stroke triumph at the Macau Golf and Country Club to become only the second player after China’s Zhang Lian-wei to win twice at the US$1 million Asian Tour event with a tournament record of 20-under-par 264.

It was sweet revenge for the 42-year-old Aussie who was pipped by Lahiri last year and he collected the winner’s cheque of US$180,000. Lahiri and Kumar shared second place after closing with a 66 and 65 respectively.

“Feel relief and rewarded as I’ve worked hard the last few weeks in Europe,” said Hend, who entered the last day with a three-shot cushion. 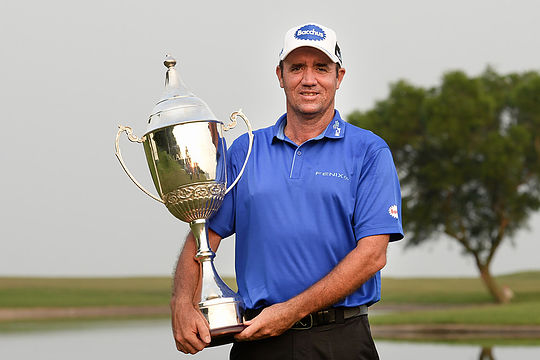 “I knew Anirban wasn’t going to go away. He’s a great player and I just went out there with the aim to shoot a good score as I knew they had to catch me. I can’t really remember much about 2013 (his win).”

“I remember more about last year where I didn’t play solid down the stretch and Anirban got me. So this year, it is a different feeling.”

Hend, who has now won seven times on the Asian Tour and will defend his UBS Hong Kong Open title next week, maintained his three-shot advantage at the turn and made a crucial par save on 10 with a six-foot putt.

Had he missed, the lead would have been cut to one as Lahiri knocked it stiff for his fourth birdie of the day.

“I was just trying to think of making a solid par,” said Hend. “Anirban hit a great shot into 10 for birdie and fortunately for me, I made a great up and down on 10 and also on 11. From there, I felt I could move forward and play solid.

“I just tried to make the right choices and not put any pressure on myself and let Anirban have a sniff. I was concerned about Anirban as once he gets a sniff it’s pretty hard to get in front of him,” added Hend, who all but guaranteed his place in the CIMB Classic in Malaysia and WGC-HSBC Champions in China over the next few weeks.

Lahiri tried to put the pressure on Hend with three birdies in the first six holes but the Aussie was too good on the day with back-to-back birdies on eight and nine to preserve his overnight lead. The Indian world number 39 then made costly bogeys on 12 and 16 to fall out of the title chase.

“I can’t be disappointed. I played well today barring a couple of really silly mistakes. All credit to Hendy. He played phenomenal golf. I was telling him that anytime you shoot a bogey free five under when you’re leading by three, you’re not going to get caught very often. He’s earned this win,” said Lahiri, the current Order of Merit leader.

“I expect Hendy to make those putts (on 10). I didn’t make a putt on 11 and then I dropped a silly shot on 12 and on 16, I shot myself in the head when I picked the wrong sprinkler head and picked myself a wrong yardage.”

Kumar made a vital last hole birdie to tie for second place, with the runner-up cheque of US$86,500 securing his card for next year. “Honestly, on this course and with Scott’s length, it would have been tough to catch him. I did get off to a good start (with a birdie and eagle) and had I made one or two more putts early on, I would have put some pressure. He played really good,” said Kumar.

Sam Brazel was the next best of the Aussies in equal 8th place and ten shots behind Hend.