Australian Scott Hend has put his hand up for Presidents Cup selection at the Fiji International.

Prior to the tournament teeing off at the Natadola Bay Championship Golf Course, Hend stated his goal for the week was to prove his value as a Captain’s selection onto the International Team.

“There is nothing more I would like than to be on a President’s Cup team this year,” said Hend, after his second round.

“With that in mind, there are no two ways about it, I have to perform, if I don’t perform I won’t get picked.”

Today he gave Captain Nick Price something to think about firing 6-under 66 in challenging Oceanside conditions. 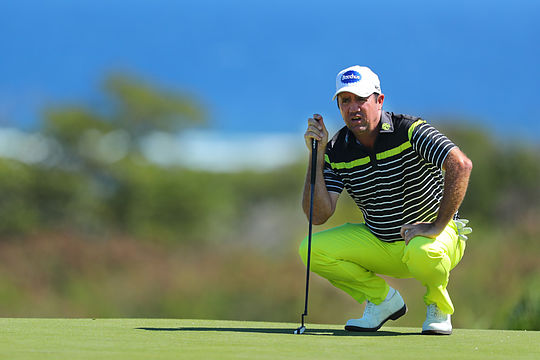 Hend got his round off to a hot start holing a 70 foot putt for eagle on the 1st and if it weren’t for a couple of unlucky breaks the Queenslander could have gone even lower.

“It was a long one. It was one that you make one out of 20 times you have a crack at it if you’re lucky,” Hend said of his long range putt.

“Everyone is going to get a bad bounce out there occasionally and I managed to get six in a row on the back-9 that didn’t really go my way.

“I’m not saying I left six out there, I’m saying I had six bounce the wrong way, I probably left two or three shots out there.

Heading into the weekend Hend is tied for the lead with fellow Australian Jason Norris, New Zealander Daniel Pearce and Malaysian Gavin Green.

The highlight of the round of 68 for Norris was his hole out birdie on the 18th which ensured his place amongst the leading quartet.

“That was unbelievable. I said to my caddy this is the toughest shot of the day, leave it a fraction short and it rolls back to my feet, so was pretty happy to go in, I would have been happy to make four,” said Norris.

“I chipped in on eight as well which was a pretty tough hole as well. It was just a fantastic day really considering the way I played and the way I putted.”

Green is happy with how he is travelling in the tournament, stating that patience is the key to his game plan.

“I stayed really patient out there in the windy conditions. I had to grind on a couple of holes. I had a few hiccups but other than that, it’s pretty solid,’ said Green, who scored 3-under 69 in the second round.

“I am in a good position right now. I will stick to the same game plan, nothing changes. It’s working for me so far. I will try and keep it on the fairways and get it close on the greens. Hopefully I can make some putts over the weekend too.”

Shooting 1-under 71, overnight leader Daniel Pearce has maintained a share of the lead heading into the weekend.

“It’s always nice to be on top. I can’t complain about how things went today,” said Pearce.

While Australians Chris Gaunt, Wade Ormsby, Stephen Leaney and New Zealander Harry Bateman, who had a hole in one on the par-3 15th hole using his gap wedge, round out the top-10 on the leaderboard at 4-under the card.

The second round cut was made at 2-over the card with 71 players making the weekend rounds.