Scott Hend took a different approach in his preparations for the Indonesia Open which kicks off this morning, when he took time off from golf to take up a regular job.

The powerful Australian took almost a week’s break from golf when he helped his brother-in-law, who is a qualified electrical engineer in Brisbane, to drill, dig holes and lay cables. 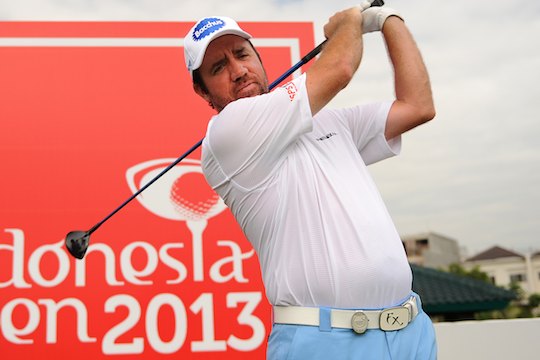 The experience has given Hend, who has won three Asian Tour titles this season, a new sense of motivation to aim for another victory at the Pantai Indah Kapuk course, the venue where he won his first Asian Tour title in 2008.

Currently ranked second on the Order of Merit, Hend will feature in the US$750,000 Asian Tour event alongside Major champion Retief Goosen of South Africa, Daniel Chopra of Sweden, a two-time winner on the US PGA Tour and reigning Asian Tour Order of Merit winner Thaworn Wiratchant of Thailand.

Thai star Thongchai Jaidee, a three-time Order of Merit winner, will also be in the elite field with India’s rising star Gaganjeet Bhullar, Liang Wen-chong of China, who won his third Asian Tour title two weeks ago and an in-form Siddikur of Bangladesh.

“I worked with my brother-in-law on his work site. I helped him and didn’t touch a golf club at all until Saturday. When I was done, I was pretty tired! I actually needed a break from golf and it was quite refreshing to experience how people work hard in their daily jobs!” said the 40-year-old Hend.

“For sure it made me appreciate my golf career even more! You are out there on the work site, drilling and digging holes and laying cables. Well that sort of stuff makes my job a lot easier!” he explained.

Winning his first Asian Tour title in Indonesia is still a vivid memory for Hend, who will be aiming to equal Thaworn’s record of winning four titles in a single season in 2005 this week.

“I actually didn’t know that I won the tournament (in 2008) so it is nice to come back here and relive those memories! To win three times anywhere is good especially with the competition we have on the Asian Tour. I have a few more tournaments to try and win so we will see how that works out,” said Hend.

The 39th edition of Indonesia’s national championship, which has a rich and illustrious history dating back to its first edition in 1974, is the nation’s oldest golf tournament.