Scott Hend confirmed himself as one of Australia’s ‘winningest’ golfers of 2013 as he cruised to a commanding three-stroke victory at the Venetian Macau Open on Sunday.

The win was Hend’s third on the Asian Tour this year after earlier triumphs in Thailand and two weeks ago in Taipei. 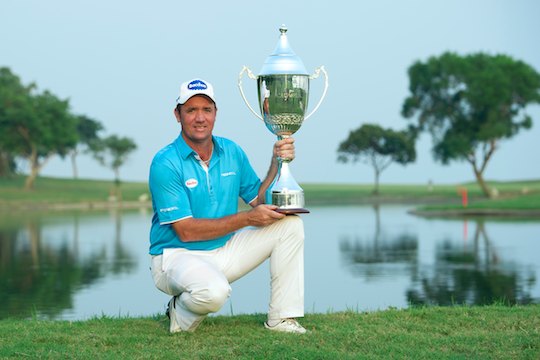 With an four-shot overnight lead, the in-form Australian comfortably held off the chasing pack and playing partners Siddukur and Ernie Els at the Macau Golf and Country Club, closing with a four-under-par 67 to for a 16-under-par 268.

India’s Anirban Lahiri matched the course record with a blistering nine-under-par 62 for second place while tournament drawcard Els shared third with Elmer Salvador of the Philippines after each shot 67 and 66 respectively.

Sydney’s Adam Groom enjoyed a barnstorming finish of his own to close with a 66 to finish the event in a tie for seventh place.

“It’s important to win again this week, for the third time, it feels good.” Hend said.

“Thursday was a difficult day, mentally and physically. Then on Friday and Saturday, I started holing putts which I haven’t done the whole year even when I won a couple of weeks ago. I’ve holed my fair share this week.”

In the first four holes, I didn’t make any birdies. Ernie started to put some heat on me and all of the sudden, I hit a great shot on the fifth for birdie. ”

Hend’s latest winner’s cheque of US$144,000 narrowed the lead Kiradech Aphibarnrat holds over him on the Asian Tour Money List. His blistering form could not come at a better time with the PGA Tour’s $7m CIMB Classic to be held in Kuala Lumpur next week on a course and in conditions that Hend is very familiar with.

The winner next week will earn a two-year exemption in the U.S. and entry to The Masters in 2014.

“Three wins in a year is definitely the best golf of my career. Who knows what’s going to happen in the next few months. There are some big tournaments coming up and it’ll be nice to perform well in those and be competitive.  The year hasn’t finished yet,” added Hend.

Els applied early pressure with birdies on two, three and six but a bogey on nine halted his momentum.

“It was very frustrating. I started off nicely again and then made a soft bogey on nine. I couldn’t afford any mistakes.”

“I needed to keep the pedal on the metal but I made that mistake and I didn’t play the back nine all that well either. “

“Tough weekend but I think Scott was very strong,” said Els, “I had four shots to make up and four shots is a lot to make up especially with the caliber of Scott. He deserved to win.”