Australia’s Scott Hend charged from six shots back to win the inaugural Chiangmai Golf Classic by three strokes after a stunning eight-under par 64 in the final round on Sunday.

Playing alongside former US PGA champion Y.E. Yang, Hend earned his third Asian Tour title in front of large crowds at the Alpine Golf Resort in Chiangmai, Thailand, moving to 3rd on the Order of Merit after pocketing the winner’s cheque of US$135,000 with a total of 20-under 268. 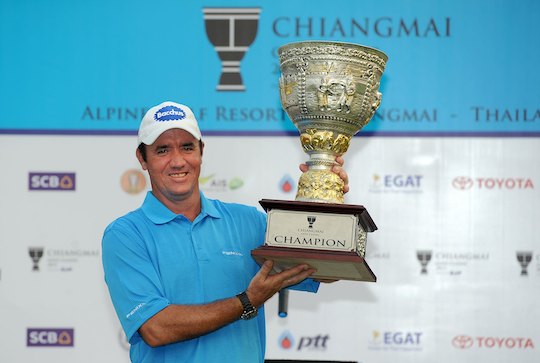 South African newcomer Bryce Easton, playing in his first Asian Tour event, also shot a 64 to take second place while a faltering Prayad Marksaeng of Thailand, who led by five overnight, settled for third on 272 after losing his swing and soaring to a final round 74.

“I played with Prayad the first two rounds and he was hitting the ball great and putting great. I was just looking for a solid top-five finish. Obviously it all fell together and I played quite well.”

“This win is fantastic. To shoot 20-under helps you believe in yourself that you’ve got the game.” said Hend, who’d previously come from behind for his other Asian Tour victories, including last year’s ISPS Handa Singapore Classic.

Playing in the final group with Marksaeng, NSW’s Matthew Stieger couldn’t match the final round fireworks of Hend and Easton but finished in a highly creditable tie for 5th at 14-under, with fellow rookie Jake Higginbottom a further shot back in a tie for 10th.