Canadian Brooke Henderson has defeated American Lindsey Weaver-Wright to claim the Shoprite LPGA Classic on the LPGA Tour after the pair finished regulation play at 12-under-par.

The win was Henderson’s 11th LPGA Tour title and her first since prevailing at the LA Open in April 2021. The Canadian posted a seven-under 64 on the final day in New Jersey to join Lindsey Weaver-Wright to force the play-off, before beating the American with a brilliant eagle at the first extra play-off hole. 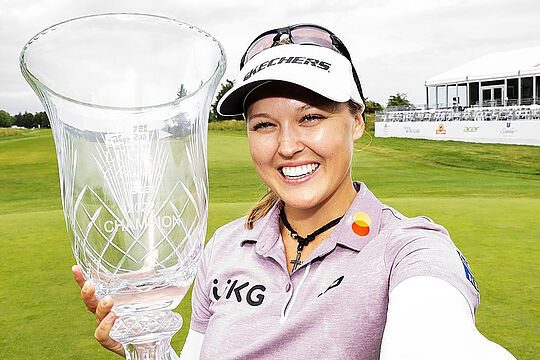 “With playoffs, you really only have one opportunity so I just tried to go out and hit really solid shots,” remarked Henderson.

“So to walk up that fairway and see that I only had a pretty short (putt) was a big relief. Just needing two putts to win was also really clutch.”

Henderson immediately made the case for contention after day one. She shot a 4-under, 67 on Friday which had her tied for third. Saturday’s 70 moved her down a few spots, but it set the stage for a spectacular Sunday in New Jersey with her final round 7-under-par 64.

Henderson moves to 11th in the world rankings and Sunday’s winner’s cheque of US$262,500 sees her move into the US$9 million club in career earnings.

England’s Jodi Ewart Shadoff eagled the par-five last to finish in solo third on 11-under-par, having also carded four birdies and two bogeys during a 4-under 67.

Steph Kyriacou was the best of the Australians along with Su Oh sharing 25th position at 4-under-par. Karis Davidson shared 42nd position with Sarah Kemp and Sarah Jane Smith in a tie for 54th position.

Kyriacou earlier had shot a 6-under 67 on Friday to take the first-round lead yet the two-time winner on the Ladies European Tour followed with rounds of 73-71.

In her six starts in her rookie year on the LPGA, the 21-year-old has made the cut four times with Sunday’s result her best so far this season.