Henderson’s last victory was almost two years ago at the 2019 Meijer LPGA Classic, and on Sunday, the 23-year-old withstood challenges from World No. 1 Jin Young Ko, Jessica Korda and Aussie Hannah Green before closing with a 67 for a one shot win over American Jessica Korda. 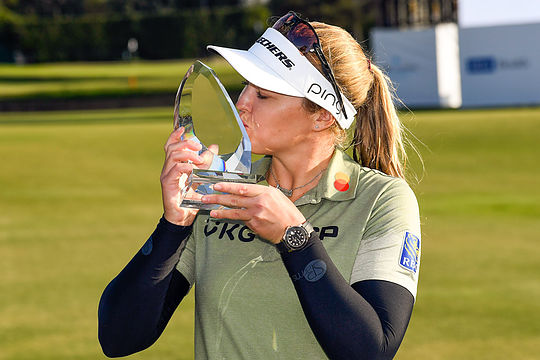 Green secure a share of third position with Ko, two strokes behind Henderson, for her best result so far this season. Green carded a final-round 66 that included an eagle on the 14th to help move her up the leaderboard.

In her last three starts on the LPGA Tour, Green has secured all top-15 results including a 12th placing a fortnight ago at the Lotte Championship.

“I felt like I was playing really great golf,” said Henderson, who came into the tournament with a pair of top-10 finishes.

“It just wasn’t my time. I had a lot of breaks go my way on Saturday and it was exciting through that final chip for par on the 18th. I remained focused on my game and was thrilled to move up the leaderboard for the win.”

Early in her professional career Henderson blasted onto the LPGA Tour. She won her first LPGA Tour event in 2015 at the Cambia Portland Classic within a year of turning professional, a title she would defend in 2016.

She went on to become the second youngest player to capture a major championship with her win at the 2016 KPMG Women’s PGA Championship.

In 2018, she won the Lotte Championship, and also became the first Canadian in 45 years to win the national championship at the CP Women’s Open.

Now with 10 titles, Henderson owns the record for most professional golf wins by a male or female Canadian.

Gabi Ruffels was the next best Aussie behind Green securing a top-20 finish with a share of 17th position. Minjee Lee shared 32nd position with Su Oh in a share of 54th.

Sarah Kemp and Katherine Kirk rounded out the Aussies who all made the weekend at the event.