New Zealander Michael Hendry has gone back-to-back at the NZPGA Championship winning the title in a playoff over Australian Scott Strange.

Hendry and Strange were tied at a course-record-equalling 19-under after four rounds when the pair returned to the 18th where Strange found trouble at a greenside bunker, allowing Hendry to putt out for the title. 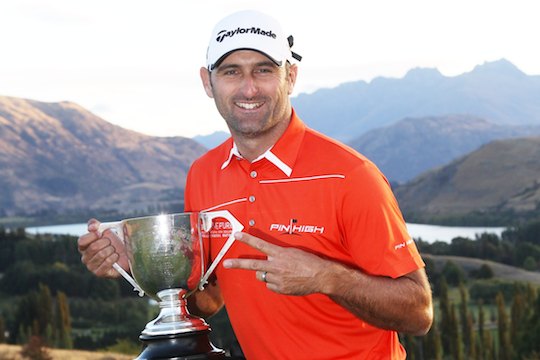 Strange earlier had fired a final round 6-under 66 to charge up the leaderboard and work his way into the playoff against Hendry.

“I’ve actually won every playoff I’ve ever been in, which is obviously a god record – not that I thought about that prior to going out,” said Hendry.

“To get across the line and for it to be at home and with the retention of the trophy, it’s just magic. You come into the week thinking this is my trophy, I’m not going to give it to anyone else. I had that attitude all week so to retain it is unbelievable.”

Hendry becomes the first person since Frank Nobilo to successful defend the title.

Despite missing the title, Strange was overall pleased with his efforts in Queenstown.

“The week has been good – I came in on an invite so I wasn’t even in the tournament two weeks ago,” said Strange.

“I have been playing nice and something clicked this week. I started holing a few putts and all of a sudden I was in contention. It’s like anything, you don’t like losing. Hats off to Mike, he did the right thing on the last, he put it on the green and he gave himself a chance.”

Finishing in a tie for third at 15-under were Kiwi pair Gareth Paddison and Josh Geary.

Rounding out the top-5 on 14-under were third round leader Rohan Blizard, China’s Li Haotong and Michael Tran from Vietnam.

Blizard chasing his second Australasian Tour title faded with a closing 73 to damage his chances for the title.

PGA Rookie of the Year for NSW/ACT, Matt Stieger finished at 12-under-par for a top-10 finish as did another rookie, Daniel Nisbet, with the pair sharing a tie for 8th.

The NZ PGA Championship sees the rounding out of Australasian Tour for a while, with the next scheduled event the Queensland Open to be played from 22 August at Brookwater Golf Club.