Henley set up his victory with opening rounds of 63 and then closed out the weekend with rounds of 65 and 70 to finish at 23-under-par for this fourth PGA Tour win.

Sunday’s victory was Henley’s first in five years, having last won the Houston Open in 2017. The 33-year-old also picked up the winner’s prize of a tidy $US1.476 million and moved from 59th to 33rd in the World Rankings .

“You always have doubts, ‘Am I going to win again?,” said Henley.

“I’ve had a lot of tournaments where I haven’t gotten it done, so this one’s really special. To be leading by six, which is my largest 54-hole lead, I’m sure, and to just play solid today and get it done gives me a lot of confidence. I’m really excited, really thankful.”

The victory also sends Henley to Kapalua in January for the Sentry Tournament of Champions in what will be the first big event on the new PGA Tour calendar.

“It’s just so hard to get in contention out here, first part, and then to close it out, it’s a really hard deal. I feel like it gets harder every year. I’m just going to try to just pull from the fact that when I didn’t feel super comfortable and I had a lead that I executed and I got it done.” 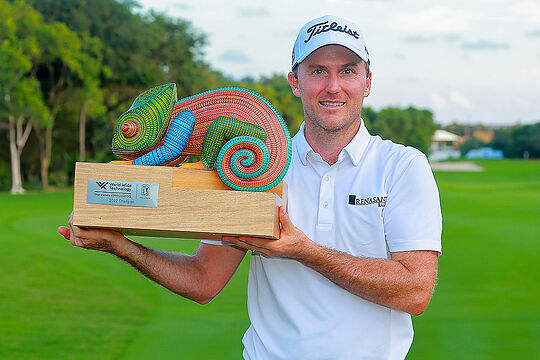 Henley’s other victories include the 2013 Sony Open, 2014 Honda Classic and the 2017 Houston Open which add to his three Web.com Tour titles.

Brian Harman finished runner-up at 19-under, with five players sharing third position at 18-under, including Scottie Scheffler, who fired the low round of the day with a 9-under 62.

Scheffler will remain at No. 2 in the Official World Golf Rankings. He needed to win or place solo in second to regain the No. 1 ranking from Northern Ireland’s Rory McIlroy, who did not play last week.

Jason Day finished in a share of 21st position, a final round 66 moving him fourteen places up the leaderboard to be the top Australian. Aaron Baddeley and Harrison Endycott missed the weekend.