Bendigo-born Herbert birdied his closing two holes in a round of 68 to join South African Christiaan Bezuidenhout, and playing in the group ahead, at nine-under par after the Springbok golfer found the water guarding the green.

The duo headed back to the 18th hole and with Herbert this time finding the water with his second shot but after taking a penalty drop the recently-turned 24-year-old superbly landed a wedge to within tap-in distance to match Bezuidenhout’s par.

It was back to the 18th for a third occasion with Herbert superbly holing out for a birdie ‘4’ to land a first European Tour victory in his 50th Tour start.

Herbert’s success comes 23 years after fellow Victorian Richard Green became the first and then only Australian to lift the unique ‘coffee pot’ trophy.

“The last ten minutes feel like I’ve been dreaming,” he said smiling.

“It’s so weird. It’s awesome. It’s just the best thing ever. It is so good. We’ve got a bottle of Scotch at home to celebrate, so I can’t wait to get into that with the boys.”

Though there was much more to Herbert’s triumph on Australia’s national day. 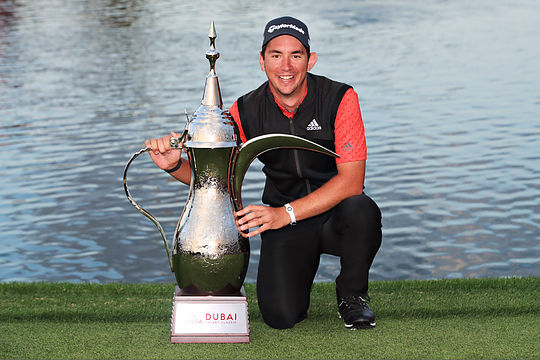 Herbert win continues an impressive run of ‘Down Under’ success on the golfing world stage to be a fifth victory in four weeks on four different Tour’s and on three continents.

Adam Scott began the victory run on December 22nd capturing the Australian PGA Championship with fellow Adelaide-born Wade Ormsby winning a second Hong Kong Open title on January 12th before much later that day when Cameron Smith won a first ‘individual’ title on the PGA Tour in succeeding at the Sony Hawaiian Open.

To top off the Down Under success, Marc Leishman won his fifth PGA Tour title at the Farmers Insurance Open this morning narrowly defeating a fast-finishing Jon Rahm at Torrey Pines.

And Herbert was asked if the run of Australian victories helped inspired his only victory.

“I’m now part of that club, that’s a pretty good club to be a part of,” he said.

“I think we’ve got some great players obviously playing well at present. We are pretty well populated on tours around the world. So yeah, it’s always great to see us Aussie guys succeeding, playing well, winning.”

“We all get behind each other, so yeah, I’m glad I could add to that list.”

Jason Scrivener was the only other Australian to make the cut finishing in a distant 58th place. Though it was McIlroy’s name than Herbert singled out.

“It’s pretty cool to now join some great names on the trophy and I know Rory won this start for his first European Tour win, so we are both in that club,” said Herbert.

“That’s a pretty cool club to be a part of.”

Herbert also collected a career-high prize pay-out of €490,323 ($A792,050) that has lifted him to second on the Race to Dubai along with a two-year European Tour exemption which is virtually a three-year exemption, given it is so early in the year.

Herbert, who is also expected to move jump from 223rd to 77th on the World Rankings, is already looking at an ‘adjusted’ 2020 season schedule.

“I haven’t even thought about what this is going to do, but the bigger events we can get into, the better, and hopefully I’m looking forward to try and play in those, and you know, win again.”

“That would be great. It was a pretty good field, so I wouldn’t mind doing it again.”

The toughened conditions to greet this year’s field got the result the Tour sought with the nine-under winning tally being the lowest ever in the history of the event and 15 shots fewer than Bryson DeChambeau’s record-setting mark of 24-under par a year ago.