Herbert makes up with Lefty 11 years on

Amongst all of the stories coming out of the 150th Open Championship last week, this one might be the strangest.

It all started at the 2011 Presidents Cup in Melbourne where a 15-year-old Lucas Herbert lied about his age to be able to gain access to the volunteer network and become a standard bearer for the week. The standard bearer gets to carry the scoreboards for each group of players throughout the round. 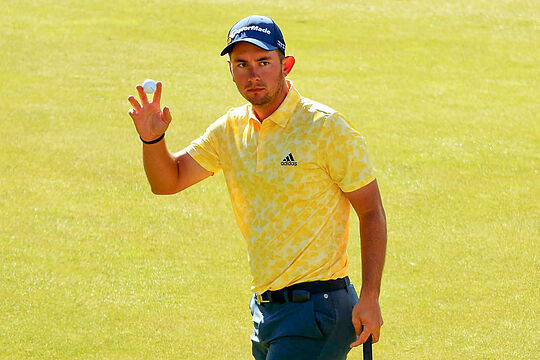 As a golf tragic teenager and knowing he may never get the chance again to mix it with the biggest names in world golf again, Herbert took the opportunity to grab as many autographs as possible.

“On the final day of play, I was hanging about, trying to get autographs, just wanting to be amongst it; thought it was the coolest thing ever,” said Herbert in an Instagram story he posted about the day.

So fast-forward a decade and Herbert is now a World No. 52 player and is drawn to play the first round of the 150th Open Championship alongside Kurt Kitayama and Phil Mickelson.

Herbert seized the chance to remind Mickelson about what happened that fateful day.

“On the 15th tee, I reminded him that I hate him and have hated him for 11 years as a result of him not signing the autograph for me,” joked Herbert. “And he was very apologetic, and he played along and it was pretty funny.”

“We finished the round; Phil shot level, I shot two-under, like I said, and we went into the scorer’s hut, and Phil called Tim over for a Sharpie and grabbed a glove out. And he passed me this glove: ‘Lucas, 11 years late.’

Sadly for Mickelson, he missed the cut in what may have been his last opportunity to play the Open Championship if the R&A chooses to go through with threats about changing the entry rules for players who defect to LIV Golf.

Along with a signed glove and a priceless story, Herbert tied for 15th place on 10-under at The Open Championship following a final round 5-under 67.