Herbert one round from joining European Tour greats

Lucas Herbert is just one round from joining some of the greats of European Tour golf in capturing the Dubai Duty Free Irish Open near Kilkenny.

The 25-year-old Bendigo-born golfer posted a two-under par 70 to now head to the final round leading by one shot at 15-under par on the Jack Nicklaus designed Mount Juliet course. 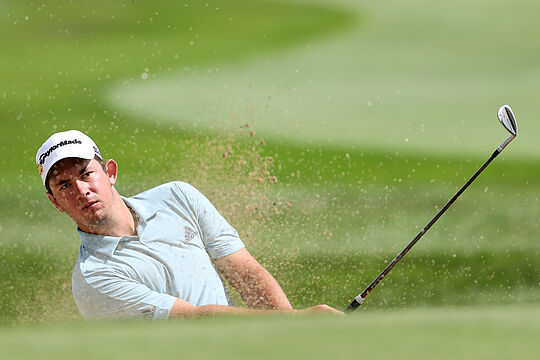 American Johannes Veerman signed for a 67 to be in second place at 14-under par.

Herbert has led from day one as he seeks to capture a second European Tour title after his breakthrough victory on Australia Day 2020 in winning the Omega Dubai Desert Classic.

“I played okay. In one aspect, it’s kind of frustrating. I could have really put a good one away and felt like I got too far away from the majority of the field, but 15 probably has just left the door open a touch,” he said.

“So, I’m still going to have to really be on it tomorrow. Also, it was pretty tough out there. The back nine the wind was swirling and blowing a lot. Didn’t hit a lot of bad shot. Couldn’t quite get some putts to fall.”

“I felt like I played all right but just didn’t get the reward for it. Overall, I can’t be to upset”.

Herbert heads into round four also seeking to become only the third Aussie in the 66-year history to win the Irish Open title following Ossie Pickworth’s triumph at Royal Dublin in 1950 and Brett Rumford’s success in 2004 at Baltray.

Long-time World No. 1 Greg Norman teed-up in the 1995 Irish Open when it was last held at Mount Juliet but with Norman a distant 11th but only two shots behind Scotland’s wily Sam Torrance.

A Herbert victory would see him join the likes of Bobby Locke, Seve Ballesteros, Nick Faldo, Colin Montgomerie, Shane Lowry and Rory McIlroy as winners of the Irish Open.

“It would be a pretty cool one to achieve. A win’s a win, right,” said Herbert.

“The Irish Open is pretty cool and if you can win an event with Tommy Fleetwood and Rory in the field, I don’t think anyone’s going to try to knock that out of your possession any time soon.

“So yeah, tomorrow is a massive chance, and you know, obviously I think in time to come I’ll probably look back on it and realise it more, but at the moment, I’m trying to stay pretty focused on the moment and really feel like I just play my game and let that sort of take care of itself.”

And there is, of course, the matter of entry into next fortnight’s rescheduled 149th Open Championship and Herbert needing to finish top-3 among those not already exempt

Looking at the pointed end of the third-round leaderboard, South African Justin Harding, and in third place on 12-under par, is the only player already exempt into Royal St. George’s.