Herbert, 25, was never headed over the four rounds, and while tied for the lead with nine holes to play, the Bendigo-born golfer fought on through the rain to emerge a brilliant three-shot winner in signing for a closing four-under par 68 to win by three shots at 19-under par on the Jack Nicklaus-designed Mount Juliet course.

Herbert had captured a maiden European Tour win on Australia Day with his 2020 Omega Dubai Classic play-off success and now a second win on American Independence Day, and where he’s now based in suburban Orlando.

Sweden’s Rickard Karlberg sensationally chipped-in for birdie at the last in a round of 67 to secure second place at 16-under par while American Johannes Veerman, who partnered Herbert over the last day, bogeyed two of his closing three holes in a 71 to end in third place on 15-under par. 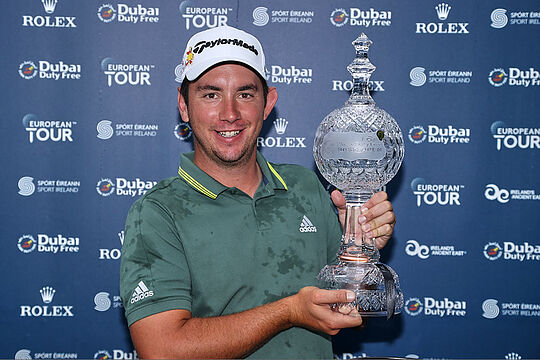 In becoming only the third Australian in 71-years to capture the Irish Open, Herbert spoke not only of his joy in winning a second Tour title but also the pain of contesting the event two years ago at Lahinch when, despite a closing 65, the-then 23-year-old finished well down the field and wondering if he had a career in the ancient club-and-ball game.

Herbert arrived at the Media Centre proudly clutching the gleaming Waterford Crystal trophy and was smiling in remarking: “You’re not going to get my hands off this one for a little while I think. This one is coming with me for a bit. I’m looking at the names on that trophy, as well. It’s pretty special. To add my name to that list is something that no one can take away from me now, and, yeah, very, very satisfying to win.”

The new World No. 55 ranked Herbert will next tee-up in Thursday’s starting Scottish Open on the links-like Renaissance Club to the east of Edinburgh before heading south to Kent for the rescheduled 149th Open that was cancelled last year due to the Covid-19 pandemic.

“Any time you can get into The Open championship, it’s a great experience,” he said.

“I think I just kind of want to celebrate this one a little bit first and then I’ll be able to move on to that one”.

And although not being born when Norman captured the 1993 Open at Royal St. George’s, Herbert revealed he’s watched video footage of Norman’s second Open Championship success

“I’ve been back and watched a little bit. I don’t think I’ve watched it fully just because I’ve never played the course before,” said Herbert.

“It’s just hard to relate as much. But I’ve definitely watched old footage of Greg winning that event. The flowing blond locks that he had; he had like a black sweater on with a shark logo on it, pretty iconic from Greg, as well.”

“Yeah, I’ve gone back and watched it a little bit but I’ll definitely be revisiting that footage. I’m pretty sure it’s on YouTube so I’ll be looking at it before I go down to Royal St. George’s for sure.”

Jason Scrivener was again in the mix but couldn’t get the low round he headed to make a move. The Western Australian closed in a share of 9th at 13-under.

Min Woo Lee shared 17th on 10-under while Maverick Antcliff was the last of the Australians to make the weekend at 8-under and equal 28th.