Herman shocks himself with ‘out-of-the-blue’ victory

We’ve all heard the saying about golf being a “funny game” and here we are again this week with the out-of-nowhere win by Jim Herman at the Wyndham Championship in the final tournament of the regular PGA Tour season.

The 42-year-old, who had missed 11 cuts this season and never finished inside the Top 25, left his best until last carding three straight birdies just to make it through to the weekend.

From there he fired off rounds of 61 and 63 including playing a 24-hole stretch beginning on Saturday in 12-under to post a 21-under tally that equalled the lowest ever weekend score by a winner in PGA Tour history.

“You obviously don’t expect a 61 and a 63 on a regular basis but you know when you need it, there is nowhere else to go but deep. Getting around 18 in 4-under just wasn’t going to do it [today],” said an emotional Herman after his win.

Not bad for someone who just last week was making headlines for all the wrong reasons after shooting the worst round (75) of the final day and finishing second last for the tournament.

Billy Horschel must be wondering what he needs to shoot to win a golf tournament, carding rounds of 66, 64, 65 and 65 to finish in outright second and a shot behind Herman.

Overnight leader Si Woo Kim tied for third on 18-under alongside Kevin Kisner, Webb Simpson and Doc Redman following a lacklustre final round of 70. 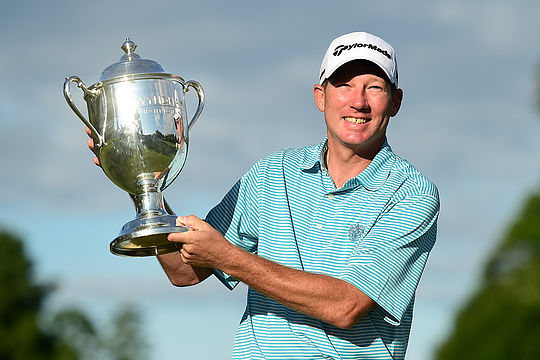 Herman was ranked 318th in the world coming into this week and with betting odds of 500/1 but has now booked himself a place in the FedExCup Playoffs beginning at this week’s Northern Trust following his move from 192nd to 54th place on Sunday.

He’ll also be making his second trip to Augusta for the 2021 Masters after missing the cut in his 2016 appearance and has a PGA Tour exemption through to the end of the 2023 season.

While Herman has three PGA Tour wins to his name he also won an Australasian PGA Tour event back in 2010 at the Moonah Classic in Victoria when the Nationwide Tour (now the Korn Ferry Tour) used to make its annual visit to our shores. Herman secured victory in a playoff with Chris Kirk.

Cameron Davis was the best of the Australians in a share of 15th place with three consecutive rounds of 65 making up for his opening round of 71 on Thursday.

Davis moves to 91st in the FedExCup standings and safely inside the top 125 who will head to the Northern Trust.

Matt Jones (T37) was the only other Aussie to make it through to the weekend and at a ranking of 86th he will also be playing this week.