Matt Jones has broken a three consecutive missed cut streak on the PGA Tour and earned his best finish of the season with a tied 4th finish at the Barbasol Championship.

The result has Jones currently 106th in the FedExCup standings, with a strong chance to secure a place in the season ending FedExCup Playoffs.

Starting the final-round in a share of 14th position, Jones rattled off an impressive final day 63 which was one stroke shy of tying his career-best of 62 at the 2013 Wyndham Championship. Jones finished four shots behind winner Jim Herman.

At 39, Jones has one PGA Tour victory to his credit winning the 2014 Houston Open having first played on the tour in 2008. This season he has played 25 events and recorded two top-10 finishes and made the cut in 16 events to be well positioned compared to last season. 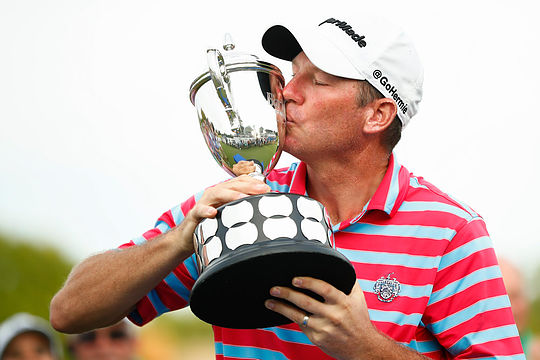 In 2017, Jones made 11 made cuts in 23 starts, collecting five top-25s and finishing No. 151 in the standings. He returned to the Korn Ferry Tour and played in two Finals events (both top-10s), highlighted by a runner-up at the DAP Championship presented by NewBrick. This result secured a return to the PGA Tour for the 2018-19 season with a 10th-place finish on the Korn Ferry Tour Finals money list.

Rookie PGA Tour player Cameron Davis recorded his career-best finish on Sunday with a share of 11th position, finishing inside the top 15 for the second time after a tied 15th at the 2016 OHL Classic.

Davis is now finding his feet on Tour having carded his 11th consecutive round under par, dating back to the second round of the Rocket Mortgage Classic.

The other Australian to make the weekend was Rod Pampling, who finished in a share of 53rd position to be currently sitting 214th on the FedExCup standings. Steve Allen failed to advance to the weekend with rounds of 73-72. His only other start this season was at the John Deere Classic, where he also missed the cut.

Robert Allenby missed the cut for the third consecutive time this season and carded his highest opening round of 2019 after opening with a 4-over 76.

John Senden was also another to miss the weekend.