Two years ago, Tiger Woods lifted the trophy at the JBWere Masters but little did he know that would be the last occasion on which he would stand on the winner’s podium.

Winless ever since, it was a rejuvenated looking Woods who rekindled days of old as he strode the fairways of The Lakes Golf Club this morning during the second round of the Australian Open in Sydney. 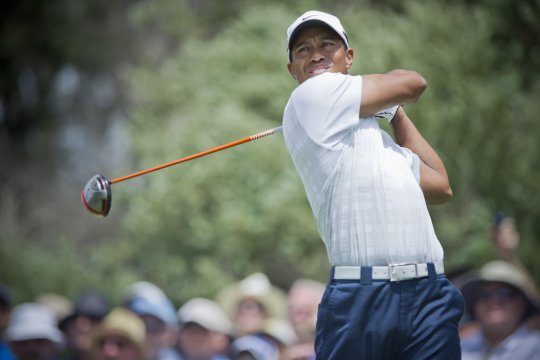 Tiger Woods nails his drive down the 8th at The Lakes during the second round of the Australian Open. Photo: Anthony Powter

Woods began his round at four under and controlled the demanding back nine at The Lakes in a display of pure tournament golf.

The world number 58 ripped five birdies out of his opening nine holes to take the tournament lead from overnight leader, Jarrod Lyle.

Woods then consolidated his gains to finish at nine under, one clear of the morning’s other big mover, Peter O’Malley.

“It could have been a little bit lower on my first nine holes because I parred a couple of the par fives. But I felt like I didn’t really miss a shot. It felt like it could easily have been eight or nine under. It feels good to be playing properly.”

His five-under-par 67 nevertheless has him at 9-under for the tournament and opens up the gates for an exciting weekend assault on another championship title.

46-year-old O’Malley collected half a dozen birdies in an unblemished second round to sit on Woods’ tail, while Australian young gun, Jason Day, is only two shots back after a second-round 68.

Adam Scott also remains in contention after an up-and-down round of 71 left the world no.8 at four-under and five adrift of Woods.

Woods is among eight Americans at the Australian Open to prepare for the Presidents Cup next week at Royal Melbourne.

Nick Watney, who opened with a 66 in the tougher afternoon conditions Thursday, took the early lead with an eagle on the 11th hole. He made only two more birdies for the rest of his round however, and finished with a 73 to fall four shots off Woods.

First round leader, Jarrod Lyle, faltered in the late afternoon breeze and closed his round with a two-over 74 to lie in a share of 5th place.

If we are to believe that the Woods of old has finally made his return, then we may well be looking at a new era of golf unfolding before our eyes. However, there are 36 holes to be played and that magic “W” for Tiger is still a long way off.