Jake Higginbottom fired a 8-under-par, 64, for a two stroke lead over Rory Bourke after the first day of the Riversdale Cup in Melbourne.

Heavy storms delayed the commencement of play with twelve players yet to complete their opening round. 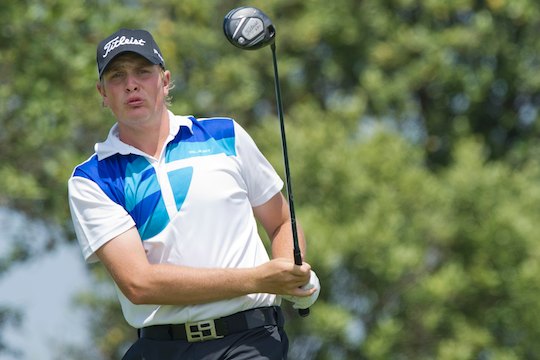 Jake Higginbottom fired an opening round 64 to lead day one of the 2012 Riversdale Cup in Melbourne (Photo: Anthony Powter)

Play was suspended at 6.00pm with those yet to finishing teeing off early tomorrow before round two commences.

Jordan Zunic and New Zealand’s Daniel Pearce are in a tie for 3rd position with rounds of 68 to be at 4-under-par.

A group of seven players are at 3-under-par, including defending champion Nathan Holman. Geoff Drakeford, Dimitrios Papadatos and Chris Brown also opened with 68.

Daniel Nisbet, winner of the recent Lake Macquarie Amateur, Matt Stieger and Kade McBride are at 2-under-par after opening with 70, six behind Higginbottom in a tie for 12th position.

Weather permitting, the 156 player field will be cut following tomorrow’s second round, with the leading 50 players and ties – plus nominated players from the State and International teams – playing the final two rounds on Saturday and Sunday.