Jake Higginbottom never looked like losing the Riversdale Cup following his opening round of 8-under-par, 64 on Thursday.

The world number 13 smashed this year’s field finishing with a 19-under-par total for a seven shot win over Queensland’s Daniel McGraw to claim yet another National Selection event title.

Higginbottom fired rounds of 64-68-68-69 around the superb Riversdale Golf Club layout in a display of precision golf.

Not even a closing 64 from McGraw was enough to overcome Higginbottom’s seven stroke overnight advantage.

“The 64 on Thursday obviously made the difference,” said Higginbottom following the presentation.

“I played well this week. I was pitching well and rolling the putts in. It’s a great result to win an event like the Riversdale Cup and hopefully it will lead to a great season for me in Europe and the US.”

Queensland’s Cameron Smith finished in 3rd position at 10-under-par after rounds of 71-69-70-68, with Daniel Nisbet having another fine tournament finishing in a tie for 4th position at 7-under-par alongside Rory Bourke and Christopher Brown. 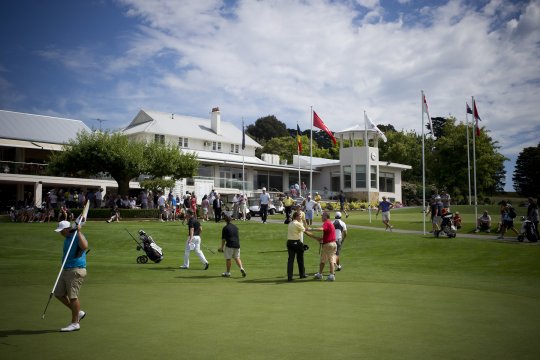 Jake Higginbottom is all smiles after winning the 2012 Riversdale Cup (Photo: Anthony Powter)

It was always going to be a big ask for the field to catch Higginbottom.

Throughout the four rounds Higginbottom remained composed, reading the fast Riversdale greens with precision and driving the ball with purpose.

“I kept it together for the four rounds, but the 64 set me up,” said Higginbottom.

“My iron play was really good over the four days. Everything was alright, it went well. My main goal is to make the Eisenhower Team and take it from there and results like this have to do your chances no harm.”

While Higginbottom has won almost everything in the junior ranks, including the 2010 Jack Newton Junior Golf Player of the Year award, it is his ability to perform well in the top amateur ranks that is getting the most attention. 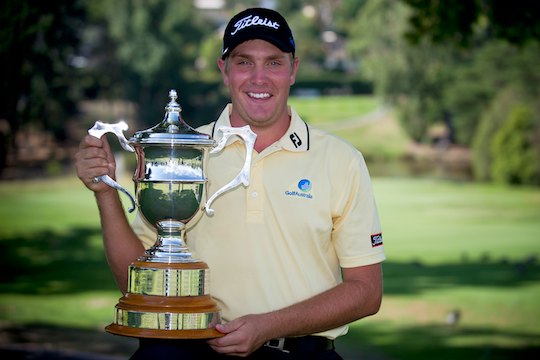 At just 18-years-old, this was Higginbottom’s third National Trial event, after winning the 2011 Keperra Bowl to add to his Queensland and New South Wales Amateur titles.

This summer, Higginbottom made the cut in each professional event he entered, including a runner-up finish at the NSW Open.

“This is not a course that you just bomb it out there,” he said.

“What I take most away from this week was the way I played the course. I thought my way around and the result followed. That’s very rewarding.”