Tour veteran Steven Jeffress and young gun Jake Higginbottom are tied for the lead after three rounds at the Fiji International.

Starting the day with a two shot lead, Higginbottom watched it quickly evaporate before maintaining his composure on a tough day to shoot 1-under 71 to be 8-under the card after three rounds.

Higginbottom’s scorecard reflected the challenging conditions with the 20-year-old’s round including an eagle, three birdies, two bogeys and a double bogey.

“I played solid towards the start but made a double on 10, it was a bit of a struggle but I just kept fighting,” said Higginbottom.

“It was pretty brutal out there and so it was nice to finish and still be in the lead at the end of the day.” 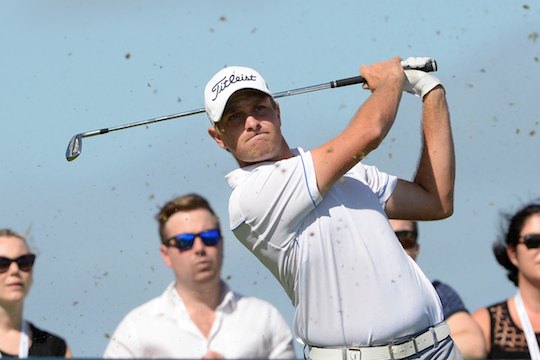 Jake Higginbottom tees off in the third round of the Fiji International (Credit: OneAsia/Paul Lakatos)

The highlight of the day for Higginbottom came on the 16th where he made an unlikely birdie.

“The 16th is a tough hole with this wind. I hit a good drive but it just crept into the bunker. I had 110 meters (to the pin) and I hit 8 iron under the tree and over the coral,” said Higginbottom who went on to one putt for birdie.

“It was probably one of the best shots I’ve hit so it was nice to walk away an unlikely birdie there.”

Despite not playing his best golf, Jeffress minimised his mistakes to fire a third round 3-under the card.

“I didn’t play as well as I played the first two days but I holed a couple of putts which was nice and just kept the ball out of trouble, so I’m very happy with it,” said Jeffress who also plays on the Japan Tour.

“I’ve played here a lot and it’s not just all about hitting pure shots around here, it’s about sometimes staying out of the long grass and minimising mistakes.”

“I’d be lying if I said I won’t be a little bit nervous tomorrow but I’ll just focus on what I’m doing.”

Sitting two shots of the lead is Queenslander Andrew Dodt while a further shot back is another Queenslander Brad Kennedy.

Rounding out the top-5 on 4-under the card is Korean Hur In-hoi, West Australian Michael Sim and Queenslander Cameron Smith.

The round of the day belonged to Kiwi David Smail who fired a new course record of 5-under 67 to be outright 8th and six shots off the lead.

Former world number one, Vijay Singh, had his best round of the tournament posting a 2-under 70 to be 1-over the card and T15th.

“I had a really rough start on the first two holes; it was raining as well so I thought it was going to be a long day,” said Singh.

“The birdie on 3 sort of settled things down and I had a great birdie on 6. I played very solid today, but on the back 9 I really played well.”