Jake Higginbottom fired opening rounds of 64-68 for a commanding five stroke lead over Rory Bourke and Jordan Zunic at the Riversdale Cup in Melbourne.

Higginbottom is the highest world ranked player competing in the event and the world number 13 has displayed precision golf around the tight Riversdale layout. 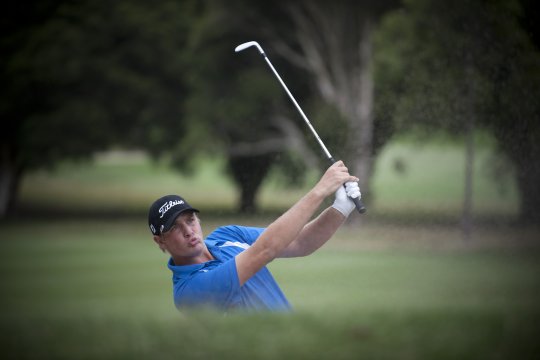 Jake Higginbottom takes a five stroke lead into the tird round of The Riversdale Cup in Melbourne (Photo: Anthony Powter)

Even tight pin placements and speedy greens did not deter the Novocastrian as he went about widening his two stroke overnight lead.

Higginbottom’s second round 68 was the day’s third best, with Mathew Walkenhorst firing the day’s low round – an impressive 7-under-par, 65.

A multiple winner with victories at the 2011 Queensland Amateur, Keperra Bowl, Junior Masters and China Amateur Open, HIgginbottom will take some stopping at Riversdale.

Earlier in the year, Higginbottom finished runner-up at the NSW Open and collected solid finishes at the Australian Open, New Zealand Open and the NSW PGA championship.

This experience will give Higginbottom the added advantage over this field, yet I would not discount the talented Jordan Zunic, Cameron Smith or Brett Drewitt moving over the weekend to challenge for the lead.

Playoffs are not uncommon at the Riversdale Cup.

The cut came in at 4-over-par with Todd Sinnott and Mathew Perry narrowly missing the weekend.