Jake Higginbottom came from three shots back to overtake 36-hole leader Jesse Hutchins and win the Cabarrus Classic at the eGolf Tour stop at Cabarrus Country Club on Friday.

Higginbottom fired a final-round 65 to finish at 17-under-par to pip Hutchins by a shot, as Hutchins slipped to a closing 69. 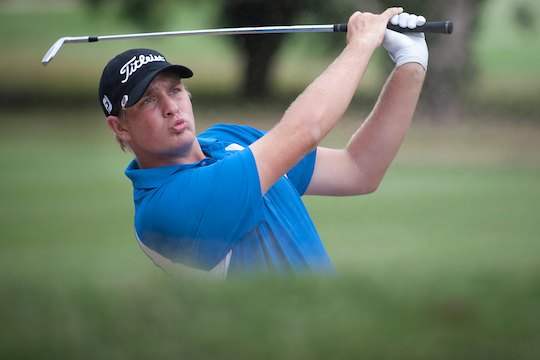 Higginbottom began his round at Cabarrus Country Club with a 1-under 71 and quickly recovered with a 9-under 63 second round. His 63, the low round of the week and one off the course record, vaulted him up the leaderboard and into Friday’s final pairing at 10-under.

“I was a bit nervous there on the first tee, so that was a dream start out of the gate to birdie the first three holes,” said the 20-year-old Higginbottom.

“I actually hit it right off the tee on the first and hit it through the trees with my second, but hit a nice wedge to three feet for birdie. So that calmed me down a little bit.”

This was just Higginbottom’s third start of the year on the eGolf Tour as he re-focuses his career in the US following a brief stint in Asia in his rookie year.

Higginbottom finished 60th with earnings of $79,719 on the 2013 Asian Tour’s Order of Merit but has always held the belief the US is where he wants to ply his trade.

His rookie year did not return the best results and to retain his Asian Tour card Higginbottom was forced to miss the European and US PGA Tour qualifying schools but has now returned to the US with the mindset of staying.

“It’s all been a good experience for me,” said Higginbottom about playing in Asia. “I’ve got plenty of time seeing as I’m only 20. It’s nice to get a head start on some of these young guys and this win here in the US was what I was after.”

After opening his US stint on the eGolf Tour with a 13th-place finish at the ArrowCreek Open two weeks ago, he missed the cut at last week’s Southern Open, yet he knew his game was there for a win.

“This was my first real win as a professional, so it feels very nice,” said Higginbottom.

“There is great competition out here, and I want to end up playing in the States, so it’s a great way to start. Sure, there’s still work needed on my game to get it to where I want to be, but this is a step in the right direction.”

Higginbottom has moved to 27th on the eGolf Tour money list with four events left before the top-50 play the four event season ending championship series.

As an amateur Higginbottom won the 2010 NSW Amateur, China Open, the 2011 Keperra Bowl and Queensland Amateur and in 2012 won the Riversdale Cup.