Young gun Australian Jake Higginbottom has stormed into the outright lead at the Fiji International.

Starting the day co-leading with six other players, Higginbottom took advantage of his morning tee time to fire a 3-under 69. 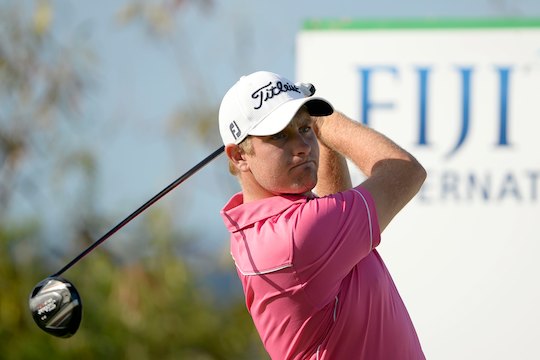 At 7-under the card the 20-year-old New South Welshman holds a two shot lead after the second round from fellow Australians Cameron Smith, Steven Jeffress and Andrew Dodt.

A proven champion, Higginbottom is relaxed heading into the weekend and feels his game is in shape to take out the title.

“It’s still a challenge to be leading after the second round, but it’s always a great position to be in.

That’s why we play to be in a position to win,” said Higginbottom who won the New Zealand Open as an amateur in 2012.

“I mean it’s a great course, it’s pretty challenging especially when the wind gets up. But I feel I’ve worked out how to play it. You have to be smart and aggressive.”

Firing the round of the day of 4-under 68, Queenslander Cameron Smith was hot with his putter.

“If you want to be in contention every week you have to putt well. The green are very tricky and I putted well on them today,” said Smith who celebrates his 21st birthday on Monday.

Steven Jeffress, who hit the first tee shot of the inaugural Fiji International yesterday, is hoping to make history by also being the first champion come Sunday.

However Jeffress is aware that as quick as you can make birdies at Natadola Bay Championship Golf Course you can make a bogey.

“I played here 20 or 30 times, long enough to know that a lead can disappear very quickly so I show the course a lot of respect.”

Fijian crowds were delighted to see Vijay Singh make the half way cut despite battling a back injury.

“In the beginning I was a little sore, I was kind of protecting my back but then I thought I’m not going to play well if I keep making that an excuse,” said Singh.

“It’s sore every time I hit, but it’s nothing I’m not used to. I’ve been playing with it for a while now; it’s not going to stop me from trying to play good golf.”

Shooting 2-over today to be 3-over for the tournament and 10 shots off the lead Singh still believes he can work himself into contention.

“I’ve been through one hurdle which is trying to play on the weekend. I’m going to be a lot more aggressive, I’m going out early and hopefully the wind stays down,” added Singh.

“I’m still in the game. The leader’s at 7-under so he’s got all the pressure. It’s not an easy golf course. If I can shoot 3, 4, 5-under tomorrow, we’ll see what happens on Sunday.”

The halfway cut was made at 5-over the card with 60 professionals making the weekend rounds.